Share All sharing options for: A Visual Look at the Post-seasons of Nelson Cruz and David Freese 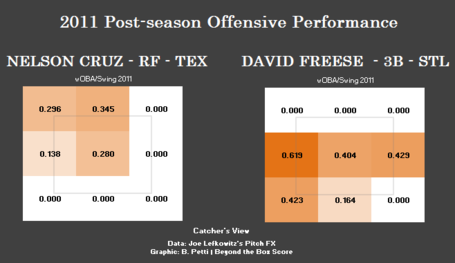 Coming into the World Series, two hitters stand out as being blazing hot: David Freese (1.315 OPS) of the Cardinals and Nelson Cruz (1.084 OPS) of the Rangers. Freese has been so hot that Albert Pujols (1.211 OPS) has some how been overshadowed, and Cruz has managed to smoke 8 of his 9 hits for extra bases (including 6 home runs).

I thought it would be interesting to see the location of pitches where both hitters have made the most of their swings so far in October.

The graphic above looks at each hitter's wOBA per swing during the playoffs.

Cruz has done more of his damage on pitches up and in as well as in the middle of the plate, while Freese has just destroyed belt-high pitches across the dish as well as pitches down and in.

If we restrict the data to just fastballs, it looks even scarier for opposing pitchers. 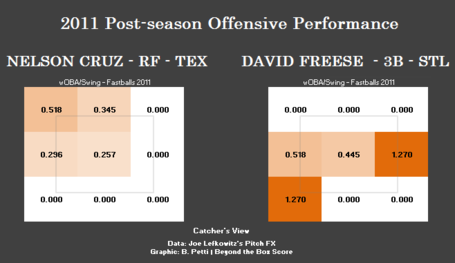 Remember, these numbers are weighted on-base average per swing.

Again, as dangerous as Cruz appears Freese has been even scarier.

Now, this isn't to say pitchers have no hope against either Cruz or Freese. For one, this data is over a very small sample. Second, Cruz has done nothing with low pitches inside and over the plate, even though he's swinging at those pitches at a rate of over 70%. Third, Freese is not handling high pitches well and is swinging at them roughly 25% of the time.

Should be fun watching how opposing pitchers, catchers, and managers approach both guys over the next few games and whether they can keep up this ridiculous pace.