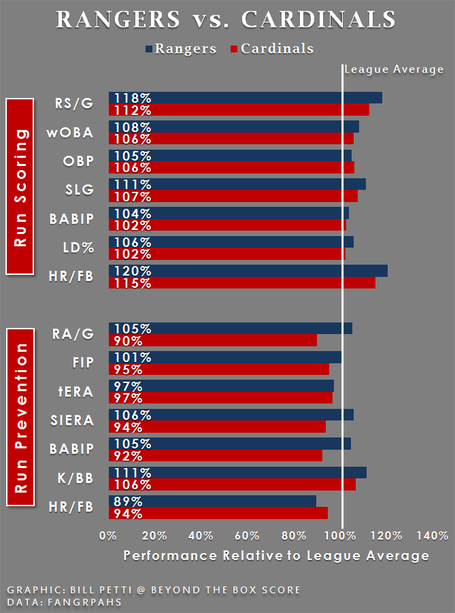 And then there were two.

Tonight, at 8:05pm EST, the Rangers and Cardinals will kick-off the 2011 World Series in St. Louis.

Despite being six games better than the Cardinals during the regular season, the Texas Rangers will not have home field advantage during the series because of the the league's attempt to make the All-Star game "matter" (that was some editorializing, folks).

So how do these teams stack up?

Both teams excel at scoring runs. The Rangers and Cardinals are very dangerous if anyone reaches base as they slug and hit the ball out of the park at rates well above either league average. The Cardinals scored 34% of their runs via home runs and the Rangers plated 38% of their runs via the long ball. And both teams scored the same percentage of runs off of home runs with at least one runner on (22%).

The big question for this series will be how the pitching and defense perform for each team. On paper, Texas appears to be the better run prevention team, but that's for the season overall.

Considering that the National League is the lighter hitting of either league and that Busch Stadium is generally an offense-depressing park, the Cardinals' run prevention appears really bad. For the year, they rank well below the National League average in just about every major category listed on the graphical preview. The Cardinals posted a WHIP of 1.31 for the year, while the Rangers posted a 1.24 in the much tougher American League.

The other interesting thing is that neither team has seen great performances from their starting pitchers over the course of the post-season. In terms of OPS against, the Cardinals' starters currently sport a .842 while the Rangers have a .915. The good news for the Cardinals is that their starters have a 2.5 K/BB ratio, which is on par with their regular season (2.44). Not so much for the Rangers (2.05 vs. 2.61).

If both teams continue to get spotty pitching from the rotation the series will essentially come down to the bullpen (which is not ideally where you want to rest your season). Neither team's starters are average 5 innings pitched per game this post-season. And both the Cardinals and Rangers bullpens have pitched more innings per game than any other team save the Yankees, but have also been arguably the top two pens in the playoffs.

This is a hard call. Our soon-to-be computer overlords have called for a Rangers win from the outset, and I've felt the Rangers were the best team in the playoffs next to the Phillies all along.

But, I am finding it hard to believe in any of the Rangers' starting pitchers. Sure, they can hit with anyone, but with the way their starters have pitched in these playoffs it's hard to see them shutting down the Cardinals offense. The same could be said for St. Louis, but the wild card for me is Chris Carpenter, who can be that ace. If Carpenter can be, well, Chris Carpenter for two games in this series I think the Cardinals have a great chance to take this series.

My final, unscientific prediction: Cardinals win the 2011 World Series, 4 games to 2 behind Chris Carpenter and their bullpen.