The Most Specialized Relievers Of 2011 (By Length Of Outing)

Share All sharing options for: The Most Specialized Relievers Of 2011 (By Length Of Outing)

This is the Age of Specialization in baseball, at least as far as relief pitchers go. It seems like every pitcher has some very well-defined role, whether it is based on a particular inning, a certain type of batter, or the leverage of the situation.

In this post, I determine which pitchers (minimum 30 relief appearances) have been used in the most specialized manner, based on the number of outs they record in their outings. The graphic below provides the MLB averages (a bit more than half of all relief appearances were exactly 1 inning) and lists some of the pitchers whose usage deviated the most from these averages. 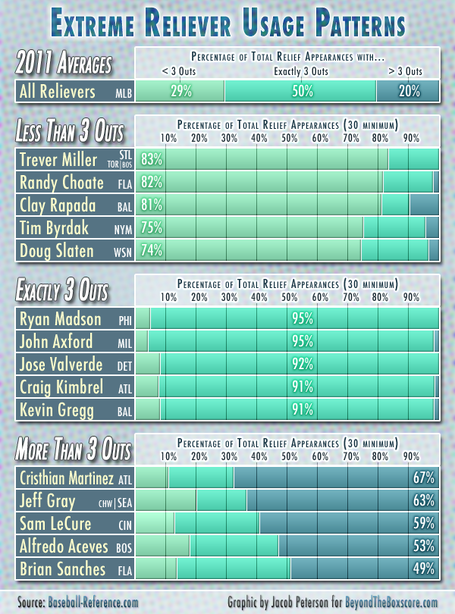 I break down each of the 3 groups after the jump.

Less Than 3 Out Specialists

These guys are the stereotypical platoon specialists. The top 5, in fact, are all left-handed, and the top four (Trever Miller, Randy Choate, Clay Rapada, and Tim Byrdak) all faced at least 65% left-handed hitters. The exception is Doug Slaten, who is left-handed but actually faced slightly more righties than lefties. Rapada actually led all pitchers in platoon rate (min. 10 IP); he had the platoon advantage against a whopping 77% of the batters he faced. Choate was 3rd in that metric, with 72%.

Nearly all of the "Less Than 3 Out" Specialists are left-handed, actually. You have to go all the way down to 18th on the "Less Than 3 Out Percentage" list to find a righty, Sam Demel at 56%. Aside from Demel, the only other 2 right-handed pitchers to pitch less than an inning in more than half their games were Ryota Igarashi and Sergio Romo.

The top 5 pitchers in this graphic had comically low innings-pitched totals relative to their number of games pitched. On average, this is how many outs they got per appearance:

Miller actually could have had an even lower figure if he hadn't been traded away from the Cardinals and their LOOGY-loving manager, Tony La Russa. While with the Cardinals, he went less than an inning in 87% of his appearances, compared to 83% for the whole season. He got only 47 outs in 39 games for St. Louis, good for a mind-boggling 1.21 outs per game.

Most of the relievers listed in the previous section are there for a reason: they just aren't good enough to be relied on to get more than a couple outs at a time, particularly when they don't have the platoon advantage. That is not the case for this group, the pitchers who pitched exactly an inning in nearly every appearance.

In fact, the top 5 listed above were the main closers for their teams. The top 4--Ryan Madson, John Axford, Jose Valverde, and Craig Kimbrel--all had fantastic years for playoff contenders. Valverde, Axford, and Kimbrel ranked 1-2-3 in MLB in saves. (Kevin Gregg was mediocre for the woeful Orioles.)

Going further down the list, only 1 of the top 17 players in "Exactly 3 Outs Percentage" did not save at least 20 games: Mike Adams. Adams did it in 89% of his games, edging out the man who often followed him in San Diego, Heath Bell, for 7th place.

Of the 28 relievers who accrued at least 20 saves, the only one who didn't get exactly 3 outs in at least 65% of his games was Sergio Santos (he came in at 59%). Nearly every closer, and many top set-up men, were more or less restricted to the standard "start the 9th with no runners on and get 3 outs" scenario. Whether that is a wise use of these pitchers is beyond the scope of this article, but I think most readers would probably want to see managers have a bit more flexibility.

These are your "long men." As you can tell from the graphic above, there weren't very many true long men in 2011. Or at least, there weren't many who managed to reach the 30-relief-appearance threshold for this post. Only 4 players went longer than an inning in at least half of their games. By comparison, 25 players went less than an inning in at least half their games.

The King of Long Men, in 2011 anyway, was the Braves' Cristhian Martinez. He got 4+ outs in more than two-thirds of his outings, including a masterful 18 outs of shutout ball in the classic 19-inning game against the Pirates in July (tied for the most by an MLB reliever this year). He also finished second in most outs per relief appearance. Here are how the 5 pitchers above stacked up in that metric:

* LeCure and Aceves made 4 starts each and Sanches made 2, but this only includes their numbers in relief.

Aceves cleans up here thanks to the fact that when he did go more than an inning, he often went more than 2 innings as well. He had 13 relief appearances of 3+ IP, which is 5 more than anyone else in MLB had. So you might say that Aceves was the "longest" reliever of 2011, but Martinez was the the most frequently used long reliever.

It's fun to compare these numbers to the ones from the first group. For instance, Aceves got more than 4 times as many outs per appearance than Trever Miller did. Or to put it another way, Aceves got 215 more outs in just 3 more appearances. Here's another one: Cristhian Martinez got more outs in the 6-inning appearance mentioned earlier than Miller recorded in a 16-game span from April 11th to May 24th. In those 16 games, Miller got 17 outs.

Between long men, short men, and "for some reason, can only pitch exactly an inning" men, modern managing has locked nearly every reliever into a well-defined role. Whether this extreme specialization is best for a team I cannot say, though it definitely has some advantages. Regardless, it appears as if this era is going to last into the foreseeable future, so get used to it.