The 2011 Comeback Players of the Year have been announced, and this year they honor Lance Berkman's surprising year in St. Louis and Jacoby Ellsbury's eye-popper in Boston. But were they really comebacks? Let's look. 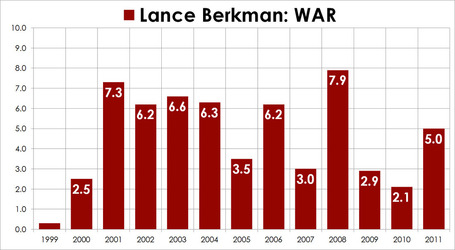 With Berkman, you can see he had a couple tough years in 2009 and 2010, but 2011 really was a nice little comeback for him. Remember, 5.0 WAR is right in the heart of the Hall of Fame Zone, and though I don't know if Berkman is interested, he could certainly use another 3-4 years of this type of production to get him past the gates. Verdict: Comeback! 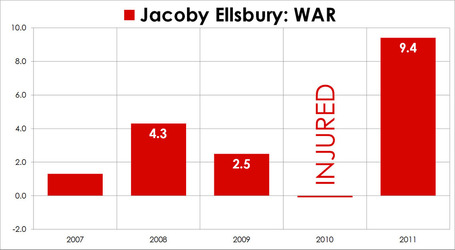 On the other hand, Ellsbury's 9.4 WAR season, while fully in the "WOW" zone, looks more like a breakout and less like a comeback. Perhaps this is just me, but comebacks should be reserved for players that looked like their career was at an end and somehow resurrected it with something slightly resembling his former glory. But considering Ellsbury has no former glory, what exactly is he coming back from? Injury? That's fine, I guess, but don't call it a comeback. Verdict: Not a comeback!