Projections Update: Can Anyone Stop the Rangers?

Share All sharing options for: Projections Update: Can Anyone Stop the Rangers? 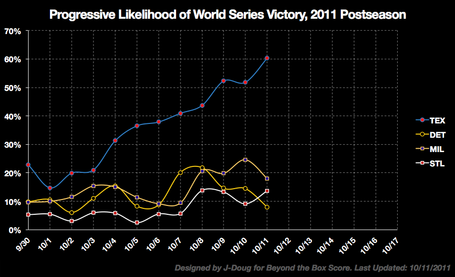 Sure, the slate is clean once the World Series begins, but by the looks of things one may wonder if anyone's in a position to compete with the 2011 Texas Rangers. Texas hasn't lost since Game 1 of the ALDS, and they've lost ground in WS% only once more: when the Brewers won during the Rangers' ALCS rain-out.

Texas is now 1:6 to win their second consecutive pennant and 2:3 to win their first World Series. So says our Log5 postseason simulator based on numbers from Baseball Prospectus. Raw numbers and figures of note after the jump. 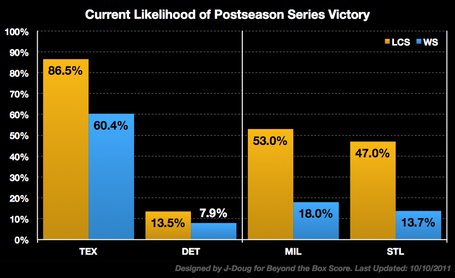