Share All sharing options for: Marlins Should Go Long with Mike Stanton

Despite mounting uncertainty surrounding the immediate financial future of Florida Miami Marlins, the organization should lock up their slugging right fielder, Giancarlo Cruz Michael Stanton.  To begin 2012, the Marlins will be entering a new stadium without any degree of certainty in their projected box office receipts. Rather than spend hordes of money in free agency, the Marlins should reaffirm their commitment to their cyclical fire sale strategy. Even with such concerns looming, the Marlins should make it a priority secure Stanton's services, until it's too late.

Promises of a cash infusion to the roster have trickled in of late, likely quite closely tied to ownerships desire to fill their new publically funded stadium. While Jeffrey Loria spending at-will seems farfetched,  it's conceivable that  the Marlins could dive into the deep end of free agent pool. Though, as exciting as it is to rush to a new ballpark - especially one funded with $347 million in taxes that could have been used to  fix numerous issues in Dade-Miami County - it's hard to imagine that the Loria is confident in his capacity to maintain similar ticket receipts in the future given the organization's consistent inability to draw fans during its brief lifespan.[1]. While not a comparable situation, Loria must be haunted by the words of Stu Sternberg following the Tampa Bay Rays inability to sell-out playoff games.

Even if Marlins are able to uncharacteristically draw three million fans in 2012, it's risky to assume such an attendance rate would continue. Bolstering the roster with multi-year contracts will only insure a lack of flexibility, not consistent revenue.[2]. Thus, the Marlins should continue to use a modified version of fire sale model, keep their obligations reasonably low until some consistent trend of ticket sales is discerned. [3].

If wise, Larry Beinfest will make extending Mike Stanton a priority, offering a deal that trades security for a several free agent years before the right fielder competes his transformation from raw talent to superstar. So what would a fair deal be and how do we figure that out?

In attempting to formulate an appropriate contract we must attempt to quantify two variables, true talent level and uncertainty. Uncertainty in performance progression and regression is an understudied topic, but is paramount in these decisions. How likely is the player to get injured? How likely are his tools to deteriorate? Where is he on the age curve? To accomplish this, often analysts discount a player's projected Wins Above Replacement (WAR[P]) by somewhere between .3 and .7 wins throughout the duration of the contract.. Depending on the player's pedigree, history, and position a prognosticator can decide how liberal to be. While the estimation may seem insignificant, over the duration of a long contract, it results in a substantial affect on the net asset.

Attempting to be overly precise when determining a player's true talent level is fool's errand, it's a theoretical level of playing ability that is always changing. Of course, that doesn't mean we can't estimate a player's WAR(P) using past performance as a baseline for projecting future performance.[x]. Personally, I like to allocate 100 points on a range of outcomes, representing the probability that outcome occurs.

After his age-21 season in 2011, Mike Stanton has cemented himself as one of the best players in all of baseball. In fact, going into the year PECOTA had his top four comparables as Frank Robinson (HOF),  Alex Rodriguez, Jay Bruce, and Justin Upton. Then, Mike Stanton posted the third highest OPS+ in the modern era for his age (141), trailing just future Hall-of-Famers Ken Griffey Junior(155) and Albert Pujols (157). Glancing at the all time list, of the 14 players who have posted better seasons, 11 are Hall-of-Famers.  While Stanton is yet to glean national attention, he will shortly, and the Marlins would be wise to sign him promptly.

Given Stanton's "Grade A Prospect" pedigree, his healthy record, and solid yet risk-adverse play in right field, I'd discount Stanton's performance just .3 WAR(P) a season. Given the aforementioned profile and his youth there is no reason why his performance couldn't beat most projections. It should be stressed, this liberal discount rate also accounts for Stanton's ability to surpass the initial conservative projection.

Given 4.65 WAR as a conservative starting place, I think the Marlins would get significant surplus value from Stanton if they were to allow him to go all the way through the arbitration process.  Below, I did a mock-up of what one possible outcome could be. Projecting salary is also difficult, so I used Prince Fielder - the best hitter to go to ARB3 - as a model. One could make the argument that a more aggressive model, say, Ryan Howard's ARB1 award of $10M should be used.

Typically, a player going through arbitration does not give a team a discount. The system, however, pays a player just a percent of his worth. The benefit of this system for both the team and the player are protected in case of a wild fluctuation in performance. If, the player's ability skyrockets, he'll earn more in arbitration. If he flops, the team isn't burdened with a long term contract.

So, what's a reasonable model for a long term deal? The three recent contracts that I've used as guidance are Justin Upton (signed at age 22, third season), Braun I (second season), and Tulowitzki I (third season). 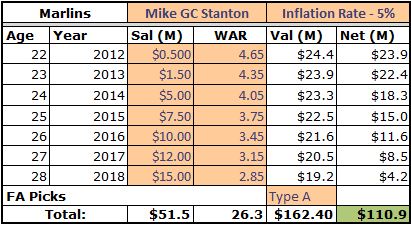 Here, Stanton and the Marlins sign a long-term deal that offers Stanton much less earning power. He'll lose two years of free agency while forgoing a big payout in ARB3. However, he'll gain significant security as a 22-year-old because all contracts in baseball are guaranteed. If the Marlins wait much longer, they may be forced to use a different contract as a model. Perhaps Stanton's profile increases to the point where he is worth of a lite version of Pujols' age 24 contract, which Albert signed at age 24 going into his fourth season.[5]. 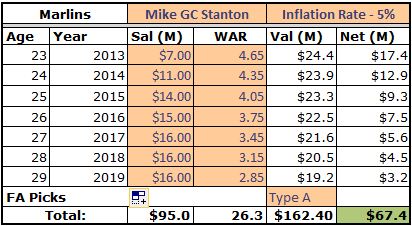 Certainly, Stanton fits the profile of a player who is worthy of the risk associated with a long term extension. The Marlins could create a great deal of value for themselves by contracting with him swiftly before the right fielder becomes a superstar in the coming years.

JD Sussman is full time law student and co-founder of Bullpen Banter. He can be reached at JDSussman@bullpenbanter.com or via twitter.You can download JD's Trade Value Calculator at Bullpen Banter on the right hand side, or Sky's on BtB's left hand side.

[1] This are Miami City and Miami-Dade County taxes, not state taxes.

[2] Obviously, spending on payroll doesn't guarantee that fans will continue to park (or winning). (See, THE 2011 NEW YORK METS)

[3] The Marlins spent far more money than people realize this year. In 2011, they spent $57M according to Cot's Contracts.

[4] Adjusting rWAR and WARP up by 18% puts them on the same scale as fWAR.

[5] It's a lite version because it was signed in 2004, and I didn't adjust for inflation. Plus, Pujols also gave the Cardinals an absurd discount. Making this comparison more fair.

[x] Some people are really really good at this. I am not, as you'll see.