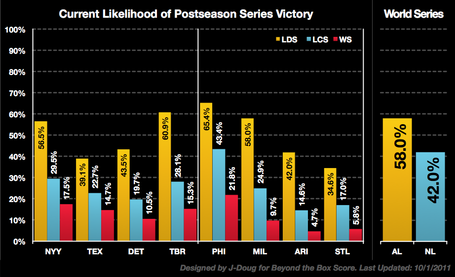 Due to an unfortunate rain-out last night in the Bronx, there was very little change in most teams' playoff chances. Matt Moore's spectacular performance against the Rangers, on the other hand, put the Rays in charge of the ALDS and the Phillies back on top of the whole shebang. So says our Log5 postseason simulator based on numbers from Baseball Prospectus.

Raw data available after the jump.