Share All sharing options for: Brian McCann: Most Underrated Catcher in History?

First off, thank you to everybody who has made me feel welcome at Beyond the Box Score. It's great to be a writer for a great site that displays such advanced statistical anylysis and ideas. I'm going to continue doing the best I can to impress all of you readers!

I've been contemplating whether or not Brian McCann is a future Hall of Famer. Obviously, he'd have to stay healthy and consistent, but how often does McCann get overshadowed by that Mauer guy? A ton. Anyway, here's a WAR Graph courtesy of fangraphs displaying Brian McCann's cumulative fWAR throughout his career while being compared to Yogi Berra, Bill Dickey, and Mickey Cochrane; three greats who are enshrined in Cooperstown. If you can not read the key, McCann is in Green, Berra is in orange, Dickey is in purple, and Cochrane is in light blue. 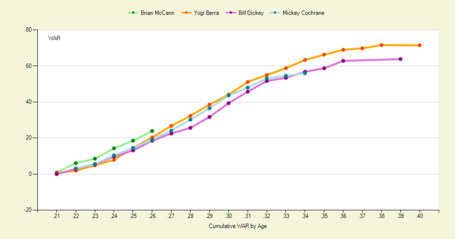 In addition to his fantastic consistency through the years, McCann boasts a career OPS+ of 122 along with a wRC+ (runs created based on linear weights of on base average) of 128, 8 points lower than the best by a catcher (Mauer) at 136. Not to mention the fact that he has averaged the same OPS+ over a 162 game span while playing behind the plate everyday.

So suppose McCann puts up above league average numbers over the next 6-10 years, then would it be fair to compare his fWAR and other career numbers to the likes of Johnny Bench or even Joe Mauer? How often do you find a catcher who plays 130+ games a year behind the plate while putting up a career wOBA of .364? Anyway, I'm intrigued by McCann and the fact that he's been so productive while remaining extremely quiet. The All-Star Game MVP is only 27 years of age and isn't close to peaking, he's just getting better and better.