Playing at Pitching Coach with Pitchf/x: A look at Ervin Santana

Share All sharing options for: Playing at Pitching Coach with Pitchf/x: A look at Ervin Santana

One of the first ideas that a person has when they come upon Pitchf/x data is that they can use the data to act as a pitching coach.  After all, we can now see how a pitch is working, where and when it's working and where and when it isn't working.  So surely we can use this data to give advice on how pitcher's should change how  they use each of their pitches, right?

Well not so fast.  There is a problem with such conclusions.  The problem is that the results of individual pitches are NOT independent of existence of other pitches....a pitcher who throws a poor fastball may be justified in doing so fairly often if doing so forces batters to NOT focus on the pitcher's good secondary stuff, allowing for that secondary stuff to be more effective.  Thus a pitcher throwing an ineffective pitch may in fact be optimal, in certain situations.

A pitcher's optimal pitch usage (in terms of frequency of using each pitch, the frequency of hitting each location, etc. etc.) should be such that the total runs prevented by the pitcher is at its maximum.  Thus even if a pitcher's fastball might improve in effectiveness if thrown in a different location, such a change should not be made if it would result in a greater loss of effectiveness in another pitch.

I begin by talking about this because in this post, I'm going to be looking at a pitcher (Ervin Santana) and will be trying to talk about how he could improve his pitches.  I hope that readers of this post keep the efficiency concept in mind....when considering the rest of this post.

Ervin Santana is a fly ball pitcher who showed a flash of greatness in 2008 (3.53 xFIP, 5.8 fWAR).  Every other year in his career, his xFIP has been about a full run higher at 4.5, which puts him as an acceptable, but not particularly great, starter.  However, that's not what's interesting about him for our purposes (If you must know, a good part of that success would seem to be caused by the fact that his pitches were basically 2 MPH faster in 2008).

What makes Santana interesting is that he is basically a two-pitch pitcher (he throws a change-up against opposite-handed batters every now and then, but it's insignificant), with one pitch (the slider) being a pretty good pitch, while the other pitch is a poor one.  The gap between these two pitches is a bit large, as you can see by the following table:

Table 1:  A look at the Expected Run Values of Ervin Santana's Slider and Fastball in 2010.  "Expected Run Value" is a measure of how effective a pitch using linear weights and using the average results for batted ball types instead of the actual results for any pitch put in play.  NEGATIVE VALUES are GOOD, POSITIVE are BAD (The opposite of Fangraphs) 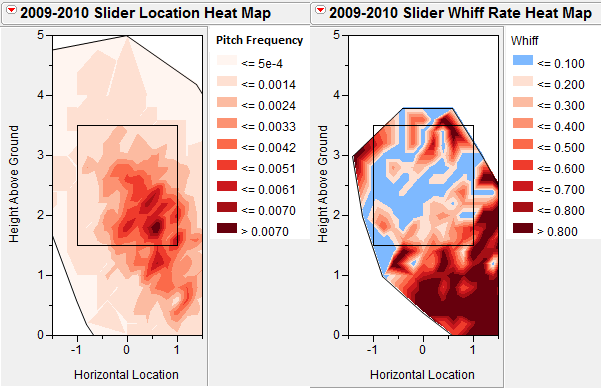 As discussed above, Santana's slider is a pretty effective pitch.  It does that by getting batters to whiff on nearly 40% of all pitches they swing at, resulting in a 17.19% swinging strike %.

Figure 1 shows how he uses the pitch.  Against both left and right-hand batters, Santana throws the pitch low and away-from-righties/inside-on-lefties.  Not coincidentally, as you look at figure 2, but this also appears to be a hot spot where the pitch is best at getting whiffs whenever a batter swings.  Thus the pitch is used to obtain swings and misses and is aimed at the location of the strike zone where that is best accomplished.  As such, this is a pretty efficient use of the pitch and unless he had really good reason (such as injury concerns), Santana shouldn't change his control over this pitch.

Santana's fastball's movement and velocity wouldn't  necessarily suggest that it would be a bad pitch.  The pitch averages 92.4 MPH with 6 inches of tail inside on right-handed batters and roughly 9 inches of hop*.  These numbers are basically the same as last year (which is why I combined 2009 with 2010 for my heat maps).

*Santana may have two fastballs, as it certainly seems that way during from the data from some games last year.  That said, when going through photos, Mike Fast couldn't find any picture of a 2-seam grip, but only a 4-seam grip.  Thus I'm treating the pitch as a single fastball.

However, the pitch is pretty poor.  A typical four-seam fastball has a swinging strike rate of around 6%.  Santana's pitch is half of that.  While i didn't list it in Table 3, the pitch (like the slider) is a fly ball pitch, and thus the pitch isn't improved by it's ground ball rate.

Now unlike the slider, the fastball serves a second purpose in addition to getting out batters:  the pitch sets up the slider so that opposing batters can't simply wait for the slider.  That said, a fastball, including one with decent velocity (92.4MPH), should be able to get out batters and get some swings and misses.  Santana's pitch doesn't.

Why is this?  It's kind of hard to say, and I would hope you guys would make some suggestions as to why this rate is so low in the comments.  I have two theories:

First, at the 2010 Pitchf/x summit (#fx2010), Mike Lentzner and Mike Fast made a presentation about the performance of pitches based upon what trajectory the pitches approach the plate from.  In other words, they looked at performance from the batter's point of view (where a curving fastball can look straight).  They identified the horizontal and vertical trajectories where pitches were most effective and where they were less effective.
Anyhow, the fastball comes in at an average final vertical velocity of -12.22 (feet per second) against left-handed batters and -11.73 against Right-Handed Batters.  For reference, a final vertical velocity of around -12 to -13 was found to be the LEAST OPTIMAL final trajectory for getting whiffs.  Pretty close right there.

Note: The second theory is related to the first, as the location of the fastball will of course be related to the trajectory of the pitch as it approaches home plate.  But I'm talking in pure terms of location here, not in terms of trajectory. 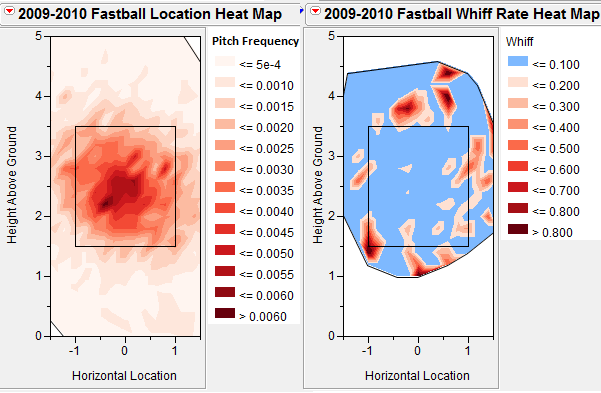 Well despite missing a lot, Santana's fastball is basically thrown in the middle of the strike zone.*  Now Figure 4 shows that the pitch doesn't get many whiffs nearly anywhere in the strike zone (look at all the blue), but that area is not one where even a typical fastball would be expected to get a great amount of whiffs.

*It should be noted that If I had done this completely properly I would've split up the fastball heat map by batter handedness.   However, the graphs would only have been very slightly different and the biggest concentration would still be in the center of the zone, so I didn't bother.

Now of course, to set up the slider (and other fastballs), the fastball does need to hit the center of the zone probably a certain amount of the time (probably not too often though).  On 3-0 counts of course, a fastball down the middle isn't unexpected.  But this extent is probably too much.

Now the best fastballs at getting whiffs are fastballs that are located high, just above the strike zone (This is true in general).  You can actually see such a zone on Santana's heat map.  Now, to Santana's credit, on  0-2 counts he does try to elevate his fastball to hit that target with the fastball to get swings and misses.  But on other counts, that doesn't seem to be the case and Santana is NOT aiming his fastball high to get swings and misses.

Thus as a pitching coach, to try and improve the fastball, I would advise Santana to try aiming high on other counts, particularly during 1-2 and 2-2 counts, where the fastball should be used in order to get a strikeout.

Like I said, this type of suggestion (aim the pitch higher) is one I make with a bit of caution....it could be that in doing so, the fastball might improve, but the slider would be less effective as the pitches low in the zone are more easily identified by batters as sliders.  If that was the case, this suggestion would backfire.

However, Santana is not a star pitcher.  His average season, except for the 2008 season when he added velocity, is only a 4.5xFIP...not particularly great.  For such a pitcher, I'd think a change would be worth a try, so as to try to actually achieve his potential by giving him two effective pitches, instead of just one.