I'm not saying it's going to happen. Perhaps I'm just suggesting why I personally think Derrek Lee's numbers will increase now that he's made the move to the AL East. The AL East features 5 of the "better" hitters ballpark in Baseball, and Camden Yards, where he'll be swinging the bat at 81 times per season. Now keep in mind that Adrian Beltre ate up Fenway Park after making the switch from a gigantic Safeco to a great hitters park in Fenway.

Keep in mind, that playing at Wrigley and Turner in '10, well put it this way, it's much harder to have fun hitting there than it would in the AL East. Thus, I've compiled Derrek Lee's 2010 Homers and distances. 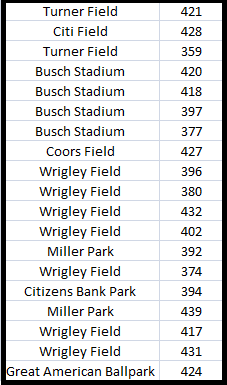 Here's a list of the dimensions at Oriole Park at Camden Yards, a place I think he not only has a chance to rebound, but out-do Beltre interms of the ballpark change.

Clearly, if his bat speed remains the same, he could hit 10+ more home runs and slug .50 points higher which would also improve his WAR by what could even be 2-3 points. Thus, even if Derrek Lee is on par of his not so impressive '10 campaign, he should still produce given the size of the ballparks in the AL East where he will be playing a combined 117 games at AL East parks. Hec, if he could even come close to duplicating his '09, Derrek could sport a .400 wOBA along with something thats underrated, his glove, a 3-6 UZR.

Furthermore, The Orioles might have found themself a diamond in the rough potentially, as long as they handle him right and he stays healthy. Such happenings, could result in a much more expensive Derrek Lee next off-season. By the way, it wouldn't even make sense to put Petco's dimensions, but great job by Lee picking the easier place to rebound rather than spacious Petco.