Benefit of the Doubt: The Cruel Umpire

Share All sharing options for: Benefit of the Doubt: The Cruel Umpire

In last week's episode of Benefit of the Doubt, I put my own spin on the interesting phenomena of the "compassionate umpire." Essentially, as the count becomes more favorable to the hitter, the strike zone grows and the zone advantage increases. 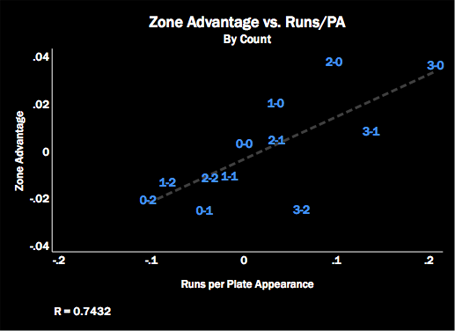 Knowing this, my working hypothesis was that the same trend applied to base-out states. For the uninitiated, base-out state describes the combination of outs and bases occupied. Since there are three out states and eight base states (empty, 1st, 2nd, 3rd, 1st & 2nd, 1st & 3rd, 2nd & 3rd, loaded), there are twenty-four base-out states.

For each of these states there is a particular run expectancy—the average number of runs expected to score in the inning—as calculated here by Tom Tango at Inside the Book.

As it turns out, my working hypothesis was not only rejected, but turned on its head entirely. My working model indicates that the umpire actually becomes less forgiving as the run value of the base-out state increases. See the chart below: 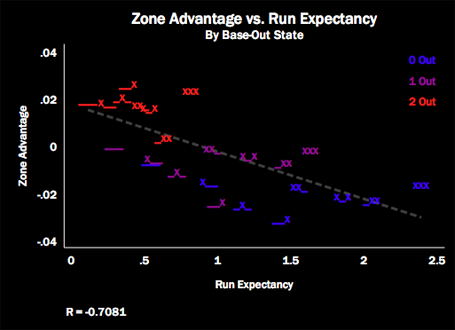 The effect is also visible on strike zone heat maps. See below the effect of out states on the zone (click to enlarge):

And also base state:

For a more succinct illustration, the most favorable base state for pitchers vs. the least favorable: 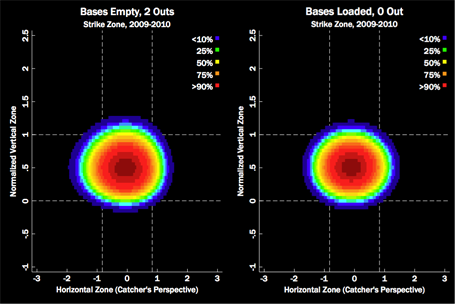 In each case, the zone shrinks as the base-out state gets worse for the pitcher and better than the hitter.

Bearing witness to this effect, the bigger question is "Why?" Well, I have absolutely no idea why, but the effect exists both independently and controlling for other relevant variables.

The umpire giveth, and the umpire taketh away.

PitchF/X data originate from Darrell Zimmerman's SQL-based PitchFX database, run expectancy data by Tom Tango at Inside the Book and Jeremy Greenhouse at Baseball Analysts. Special thanks to Mike Fast for his advisement prior to posting.