The number of the day is 107.1. Don't start adjusting your radio now. No, that is the career UZR of Scott Rolen, a world champ and potential Hall of Fame 3rd baseman. Well, with the Hall of Fame results being announced tomorow, I thought it would be nice to discuss a post that you will probably see in 10 years on Beyond the Box Score, Scott Rolen's Hall of Fame candidacy. I'm going to discuss it 10 years early.

The case that I really want to make here, is that Rolen to me, is one of the most underrated players in the game among players this generation and certainly amongst 21st century players. Here's a graph that I made ranking the top 10 fWAR leaders over the past 10 years: 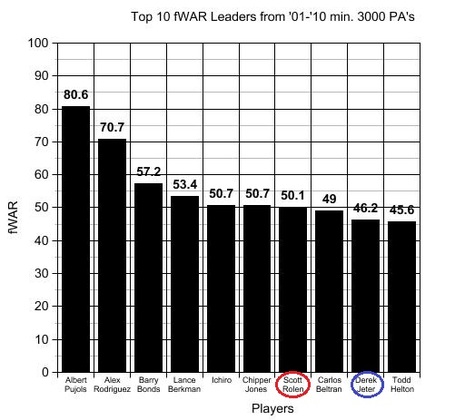 Clearly, Rolen has been one of the best in the game since he made his MLB debut in 1996. The 8 time gold glover, as you can see, is 7th among Major Leaguers over the past 10 seasons with a minimum of 3000 AB's ahead of Derek Jeter, Todd Helton, Vladimir Guerrero, Miguel Tejada, and Miguel Cabrera along with obviously, many other great players; not to mention a career 128 wRC+ to go along with a career .373 Weighted On-base Average (wOBA). That wOBA puts him 16th all-time among third-baseman with 4000 or more at-bats.

Furthermore, when you hear a discussion about 3rd baseman, you usually do not hear the likes of Scott Rolen, although you certainly should. With 1212 RBI's, he's likely to hit the magic number of 1500 before it's all said and done, which is something we know the Hall of Fame voters look at it, along with home runs (303) and AVG (.284). But along with wOBA and wRC+, I'd like to point out his 10.8 BB% and 19.8 K% to go with a wRAA (runs above average based on wOBA) of 282 when contemplating Rolen's Hall of Fame case.

Bottom line, one of the more underrated players this generation has seen deserves more publicity and attention for what he has done on the field and the impact he has had on the game. Hec, imagine the 2006 Cards without him? I know they have that Albert guy but that season was in line with his career numbers, which are again, pretty darn good if you ask me.