Stadium Boom Amounts to Fountain of Youth for MLB Parks

Share All sharing options for: Stadium Boom Amounts to Fountain of Youth for MLB Parks

When conducting baseball research, my thoughts often turn to the state of the baseball economy and the effect of new ballparks on the game. However, I've personally never seen the new stadium boom quantified—let alone visualized—so I decided to take a swing at it. Here's what I came up with. 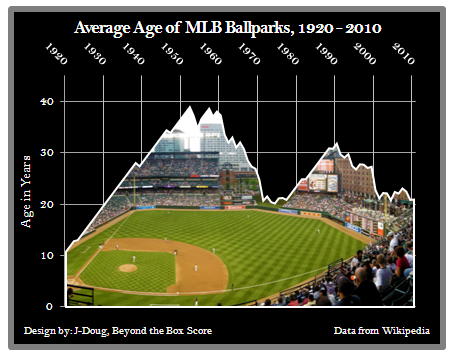 By plotting the age of all MLB parks across time, it becomes very apparent when baseball construction was booming. We see two very clear eras of stadium growth: first, with the expansion years of 1961-1977, and second, with the stadium boom of the 1990s onward.

While this was the general pattern I expected, I was somewhat surprised to see that the average ballpark is just as young today as it was immediately following expansion, although the rejuvenation of MLB parks does seem to be more durable this time around.

There are three choices I made regarding the data that are worth addressing. First, I treated major renovations differently than minor ones. When a stadium is torn to the ground and rebuilt, a la Yankee Stadium 1974-75 (or less notably, Memorial Stadium in Baltimore 1949-50), I count the renovated park as a new park with a new opening date. For more common renovations, such as the recent makeovers of Fenway and Kansas City's Kauffman Stadium, I went with the original open date.

Second, when two teams shared a stadium (as with the St. Louis Cardinals and Browns through 1953) I counted the park only once.

Finally, alternate home sites, such as the Expos games in Hiram Bithorn Stadium in San Juan, PR, or the exhibition games that the Chicago White Sox played in Milwaukee following the departure of the Braves, did not figure into the data.

The data for the chart are presented below. A larger picture of the chart is available upon request, as I prefer to handle the shrinking of my images rather than leave it up to SB Nation's CMS. All data were obtained via Wikipedia.