Share All sharing options for: Player Volatility: The Case of David Wright

As someone who follows the Mets closely I've heard quite a lot over the years about how David Wright is a streaky hitter.  This term gets tossed around routinely in baseball circles.  There has been a lot of work done to examine whether their is such a thing as "getting hot", and generally speaking every hitter will enjoy some degree of "hot" or "cold" streak throughout a 162 game season.

But rather than dismiss the idea I thought I would examine the extent to which Wright is volatile--how often does he contribute positively to the Mets' chances of winning and, when he doesn't, how long and deep are those time periods?  How drastic are his daily swings in performance?  Has he become more or less volatile over his career?

I thought the easiest way to approach this subject would be to conceptualize daily player performance like stocks, with Win Probability Added (WPA) substituting for price.  WPA basically takes a player's performance and determines, based on the inning, score, outs, and runners on base at the time, how much the player's actions increased or decreased the team's chance of winning based on that situations Win Expectancy.  Partly inspired by Chris' earlier visualization of Texiera and Gonzalez, I took Wright's 6 seasons as a starter and calculated 10-game moving averages for his WPA.  I then charted each year side by side.  The x-axis represents his career games.  Colors correspond to years/seasons.  The grey band represents one standard deviation from his career average of .022 WPA. 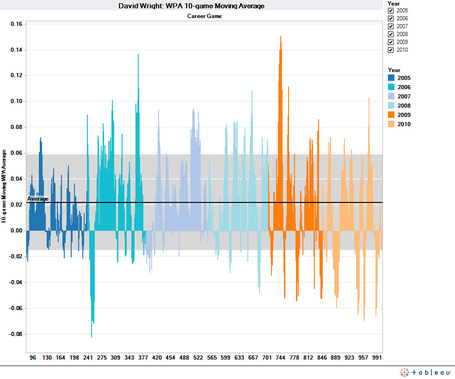 As one would expect, Wright experiences peaks and valleys over the course of the season.  If we look closely, however, we see that Wright does appear to have become both more volatile over the past few years and has experienced an increase in stretches where, on average, he negatively affects the Mets chances of winning games.  Wright's positive streaks do not last as long and his negative streaks have deepened and last longer.

Wright's best year was 2007, where he averaged a WPA of .029 (highest since 2005) and had a standard deviation of .032 (second lowest since 2005).   Wright's lack of volatility coincided with his best overall performance at the plate (OPS+ of 149, offensive Wins Above Replacement of 7.5).  Since 2007 we see an increase in deep negative stretches, with 2009 and 2010 looking especially volatile.  Essentially, Wright has gone from a consistent high-performer to a boom-or-bust type player. 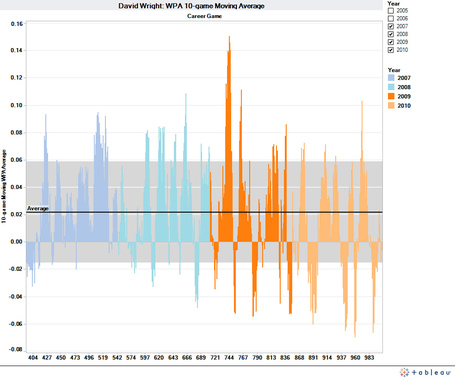 What's driving this change?  Answering that question could fill an entire post (and likely will at some point), but at first glance I'd say Wright's decreasing walk to strikeout ratio is partly to blame.  In 2007, Wright had a BB/K ratio of .82.  That ratio declined to .80 in 2008, .53 in 2009, and .43 in 2010 (widely considered a bounce back year for Wright due to the return of his power).  In each of those years, Wright's average WPA decreased while the standard deviation (or volatility) of his WPA increased.   The next natural question is why the shift in his BB/K ratio and how that exactly impacts game-to-game volatility, but that will have to wait for another time.

Now, I don't think tracking player volatility is all that helpful to teams in season (but could be interesting for fans).  However, when you are evaluating whether or not to acquire or move a player looking an understanding of the volatility of their day-to-day production could be useful.  It could very well be that two players with near identical seasonal statistics (whether that be OBP, SLG, OPS+, etc) have vastly different volatility scores.  As a GM, that's information I would like to consider when making roster decisions.

I plan on exploring this topic further in future posts, looking at individual players, comparing players, and exploring the general usefulness of analyzing volatility.  Would appreciate reader thoughts on the subject.