My new toy is Weighted WAR (wWAR)—a peak-adjusted version of Rally's Wins Above Replacement (from Baseball-Reference) that, quite simply, just combines Wins Above Replacement, Wins Above Excellence, and Wins Above MVP. Last week I showed you how players on this year's Hall of Fame ballot stack up against current Hall of Famers using this metric. Because of all the festivities of the past week, I wasn't able to cook anything brand new up. But I did want to apply wWAR elsewhere. Since I've beaten this year's ballot to death, let's look at the upcoming ballots!

So, here are the current Hall of Famers, by wWAR, with ballot newcomers from 2012 to 2015 mixed in (in green). Be sure to see the full version here—the screen shots are trimmed at the Hall of Fame Median. 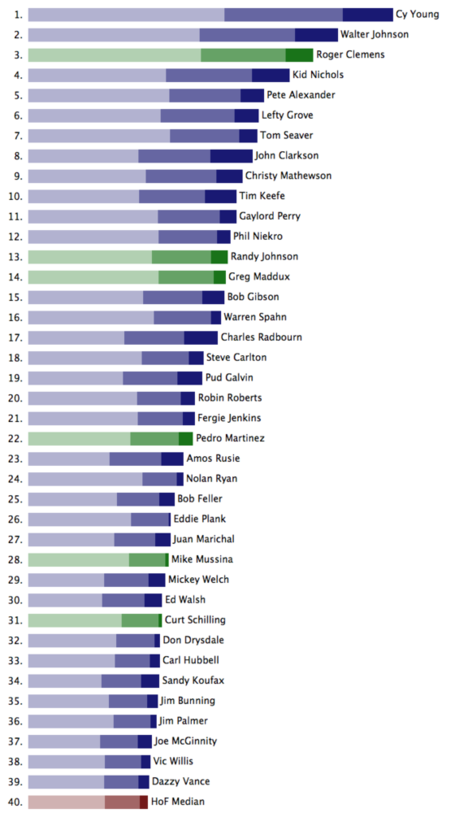 Let's do some observations:

So, what jumps out at you? In addition to the 10+ worth Hall of Fame candidates we have this year, I see sixteen more hitting the ballot in the next four years. The Hall of Fame median is about to go way up.

Update: (3/15/2011) I just posted the last of a series of articles where I created the "Hall of wWAR". I re-populated the Hall of Fame based purely on wWAR. Have a look!