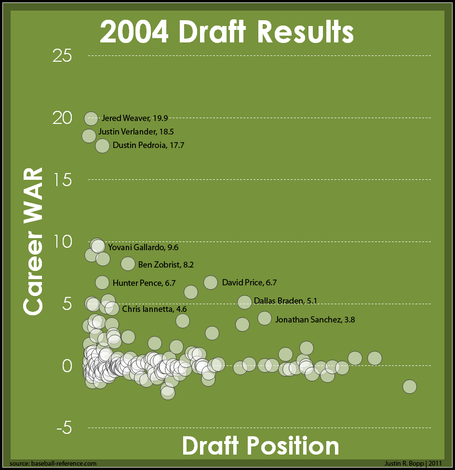 1. 168 out of 1500 players in this draft have reached the Majors at least once and played enough to earn WAR (which could be negative, zero, or positive).

3. Six years in, players looking toward the Hall of Fame should be somewhere around 18-24 WAR  and are probably close to peak production. Only 10-15 more years for them to possibly earn enough to justify their candidacy.

4. Zobrist is having himself a nice little career. But better (even marginally) than Hunter Pence and David Price? I had no idea.

5. Each of the Top 24 picks has seen the biggs except for two: Matthew Bush (Padres, #1 overall) and Wade Townsend (Orioles, #8 overall).

6. Four of the top 8 picks were drafted out of the state of Texas. Three of them played for Rice -- and one of the Rice players just happens to be Townsend, mentioned in previous point.

7. Billy Butler has somehow managed 5 WAR, despite platooning at 1st and DH'ing it much of the time. He was picked two slots after Jered Weaver (19.9 WAR) and one place above Stephen Drew (8.9 WAR).

9. It could be the slightly different scale, but 2004 looks like it has less noise than the 2005 draft. What gives? Is this something where just an extra year has helped the guys in the negatives back up a little bit? Or did they just not get as many chances as the guys that came a year later?