Share All sharing options for: Hanson's Drop In Strikeouts

Tommy Hanson had a successful second season in the big leagues last year, pitching 202 2/3 innings with a 3.33 ERA, 3.31 FIP, and 4.04 xFIP.  His contributions were good for 4.3 fWAR.  Throughout his minor league career, Hanson had been an extreme strikeout pitcher (10.7 K/9 in 389 innings); his 2010 rate of 7.68 was better than the league average, but was nothing particularly spectacular based on his minor league track record.  Looking more closely at his 2010 season, you can see that his ability to strike out hitters sharply declined by the end of the year.  The table below shows some splits for Hanson by month in 2010 (September stats include one October start):


At the end of the year, Hanson experienced a sharp drop in his strikeout rate; he remained effective due to improved control.  Taking a closer look at his pitches gives us a slightly better idea of what changed for Hanson last year.  His repertoire consists of a fastball, a slider, a curveball, and a changeup.  I'm calling his fastball a four-seamer for now, but there are probably some two-seamers as well.  Hanson threw a fastball or a slider last year nearly 85% of the time, so I'll focus primarily on those two of Hanson's offerings.  Splitting up Hanson's whiff rate by the two pitches gives us a bit more insight as to what happened:


While the slider became more effective from the start of the season, the fastball's whiff rate was half as high in August and September as it was in April and May.  So right there, you have some explanation for the decrease in strikeouts - Hanson became unable to rely on his fastball for garnering swings and misses.  But why?  A possible explanation is that Hanson lost velocity as the season went on: 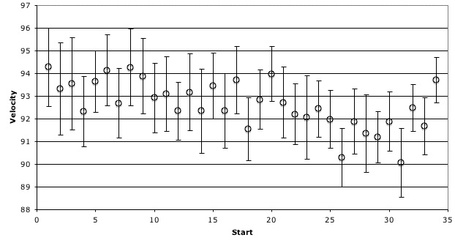 I saw no detectable difference in pitch location (fastballs higher in the zone tend to be harder to hit) or movement, so I think it's quite possible that the loss of velocity caused more contact.  One last think I'd like to see is whether or not Hanson's pitch selection with two strikes changed as it became harder for him to put hitters away with fastballs.  There was a very slight change:

Basically, I can draw one conclusion from the data: a sharp increase in fastball contact, probably at least in part caused by decreased velocity, made it harder for Hanson to put hitters away, leading to more balls in play.

The PITCHf/x data in this post are courtesy of Joe Lefkowitz's tool; other data are from Fangraphs.  Thanks to Peter Hjort for the idea for this post.