Share All sharing options for: The Impact of Luck, K's, and BB's on Hitters in 2010

I've been helping out  a friend that works with Little League players. Part of what we've been doing is trying to better identify the true value of players and what areas each player should be working on. This is difficult given the drastically smaller N you have to work with at that level, but there's some things you can do. One thing that the analysis emphasized (and this is true at any level) is the impact of strikeouts on performance. Specifically, we looked at how decreasing each players' strikeout rate would impact their overall performance.  It got me thinking about how this would look for MLB players.

So I decided to take those players in 2010 that had >=400 plate appearances (n=205) and see what impact a small change in their strikeout rate would have on their overall performance (measured by wOBA). First, I calculated wOBA using Matt'scustom linear weights just to make sure the comparison would be apples to apples.  Then, I took each players' strikeout rate (K%) and decreased it by 1%.  Overall, a 1% change in K% increased a hitter's on-base percentage by .003 points, slugging by .005 points, OPS by .008 points, and wOBA by .003*.  Now, the impact of change will differ by player, since the outcome of balls in play will be different by player (i.e. players with a high percentage of home runs per balls in play will see a disproportionate increase in their OPS versus less powerful hitters).  In order to get a better sense of who would benefit the most by decreasing their K% I decided to normalize each player's statistics for 2010 by incorporating their 3-year trailing average for batting average on balls in play (BABIP).  The idea here was to strip out as much bad or good luck as possible and then compare their expected 2010 to what that season could have looked like had they decreased their K%.  Here are the players that benefited the most and least due to abnormally high or low BABIP last year: 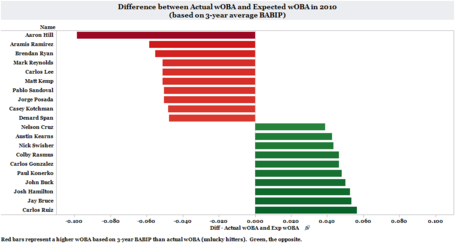 In and of itself, this is interesting to analyze.  Josh Hamilton was certainly aided by a high BABIP last year, but even taking his 3-year average he still would have been elite.  John Buck, not so much.  His .346 wOBA drops all the way to .295.  Aaron Hill should have had a wOBA almost 100 points higher.  And the Orioles newest boom-or-bust hitter, Mark Reynolds, should have posted a wOBA of .384 last year, even while striking out 42% of the time.  It's amazing what luck can do to a hitter.

Let's stay with Reynolds.  Now that we know how much luck impacted these hitters last year, what impact could working on K's have on a player like Reynolds?  If Reynolds managed to decrease his K% by 5 percent he would still strikeout 37% of the time--which is still staggering--but if his BABIP is normal he end up with a wOBA of .403, which would have been 10th best last year in all of baseball.  Of course, with a BABIP of .343 as opposed to .257 and 5% more balls in play that have a 52% of going for extra-bases we can see how Reynolds performance would improve.  Players with relatively low BABIP will benefit from striking out less, but nowhere near as much as those whose batted balls fall for hits.  If hitters have a relatively low BABIP their big payoff comes from walking more.  If you look at the players that did better when they increased their BB% by 5% versus those that decreased their K% by the same percentage it's clearly not the sluggers.  In fact, the correlation between extra-base hit percentage and the difference in improving wOBA due to K% vs. BB% is .88 (more XBH, greater the difference in favor of lowering K's instead of increasing BB's).  Here's the top and bottom 5 (full list viewable here): 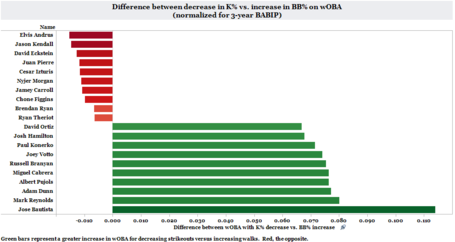 This isn't to say that hitters should ignore walks and simply put the ball in play more.  Rather, it merely illustrates that in many cases decreasing K's is more advantageous than increasing BB's.  Strategically speaking, it might make the case for some hitters to be more aggressive rather than work the count.  Reynolds is a player who has increased his BB% the past four seasons (8.9%, 10.4%,11.5%, 13.9%), but he's also increased his K% (35.2%, 37.8%, 38.6%, 42.3%).  He's also among the leaders in pitches seen over that time.  The equal jumps in BB% have not countered his increase in K%.  This suggests he may want to work more on being more aggressive in the count and worrying less about increasing his walks (his OPS on the first pitch is over 1.000) so as to avoid the pitcher's counts that lead to his K's.