It's been quite a peculiar off-season hasn't it? We've seen ten-figure deals handed out to the wrong players, we've witnessed some interesting trades, and especially some surprising low-risk high-upside deals. However, lately, talk has been dominated by comeback candidates signing for an extremely low base but finding the right fit. Well, until Manny Ramirez signed, Jeff Francis was labeled as one of the better pickups of the off-season. Now, as the Rays impressed the baseball world yet again by signing Manny to a $2MM deal, the best deal of the off-season crown has been handed to Mannywood, or Mannyburg if you will by many in the industry. So here you are: The 22 most notable players to have been signed for a larger amount this off-season than Manny. 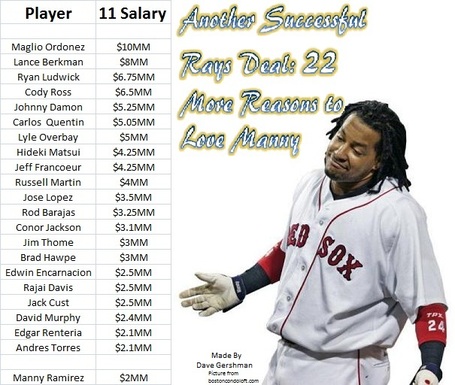 So this chart that I've compiled is intended to emphasize the other ways teams could have simply waited before spending their money. It's also focusing on the fact that Manny may very well outperform most of these players, for a cheaper cost. Keep in mind, several of the names on this chart were not free agent signings. However, if you would rather have Manny for $2MM as your designated hitter than Cody Ross for $6MM as your outfielder, then you can understand. The arbitration players such as Carlos Quentin, are simply to highlight the fact that Manny may very well outperform him. Every single one of these teams could have found a potential fit for Manny had they not spent the money elsewhere. Thus, an interesting situation on hand!

Note: Those who have not agreed on a '11 salary or are heading in to arbitration, I listed their '10 salary, which is still north of $2MM. Also, Matt Diaz is getting $2MM this season, but he also recieved a $250K signing bonus, so if you'd like to count that, it will push him over the Manny limit as well.