Exploring the Rule Changes of the 1870's

Share All sharing options for: Exploring the Rule Changes of the 1870's

After my post went up last week in which I presented Weighted On-Base Averages for the 1870's - both single-season and decade-long wOBA's - former Beyond the Boxscore writer extraordinaire Cyril Morong emailed me this link on Ross Barnes - who's talents I lauded in my post - and rule changes of the 19th century. I encourage everyone to go read that piece on Barnes before finishing this.

One of the things I haven't touched on, despite digging into 19th century baseball with stat shovels are the rule changes. It's fair to say that while the core of the game - the shape of the field, placement of the bases, goals of the game (i.e.: score more runs than you give up) - have all remained the same in the last 130+ years, the way the game is played has changed quite a bit. It's stayed the same, yet changed immensely, if you will.

Now, I bring you some of the important rule changes in the 1870's that you may or may not have known about. 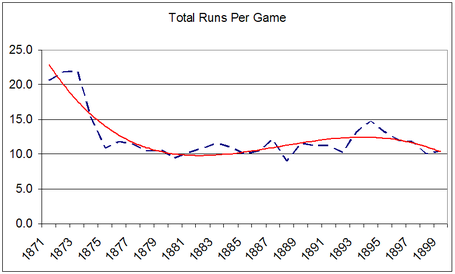 This is total runs scored per game between the two teams, not just the average runs per game a team scored in a given year. Once we get beyond the 1870's, it really flattens out, but if you somehow found a sweet time masheen (I hope someone gets the reference) and attended a game in 1871, you were likely to see what would amount to a low-ish scoring modern football game rather than a baseball score you're used to today. Teams combined for around 20 runs a game from 1871-1873. That did drop to around 15 in 1874 and dropped again to just under 11 runs in 1875 where it would hover for the next couple decades.

Why the big offense and the subsequent drops in offense? Some rule changes can explain that.

1871: the first major league baseball game is held on May 4th, 1871 in Fort Wayne, Indiana between the Fort Wayne Kekiongas and the Cleveland Forest Citys. Fort Wayne won 2-0 and only played 19 games that year.

1872: Pitchers were allowed to snap their wrists which brought about the curveball. However, pitchers were still required to pitch underhand. They also regulated the weight and dimensions of the baseball.

1873: Spectator Interference is introduced. Also, the ball is also declared dead and all base runners can advance if a player catches the ball in his hat.

1874: The Batters Box is introduced. Additionally, Umpires, players and official scorers are banned from gambling on the game. The Balk rule also came into fruition.

1877: 15-inch canvas bags became the norm for bases. Home plate became placed universally in the angle formed by the intersection of the first and third base lines. Fair-foul hits were outlawed. The walk is removed from a players at-bat total. Somewhere, an unborn Collin Wyers cries at the anguish this would give future sabermetricians everywhere.

1879: The Players Reserve Clause was introduced into player contracts for the first time. The first staff of Umpires were used. A pitcher had to face a batter before pitching to him. The number of "called balls" became 9 and all balls were either strikes, balls, or fouls.

Naturally an organized, growing sport is going to change drastically but all of these changes occurred in  just the first eight years of the National Association. This was also quite the feat given the league had very little power over anything that went on in the league. Anyone could field a team so long as they paid the dues - which weren't much at all - and the made their own schedules so long as they played each team a specified number of times. There was no central office and the punishment for an insubordinate club was that club forfeiting their dues - which weren't all that much to begin with. This, eventually, led to the demise of the National Association in 1875.