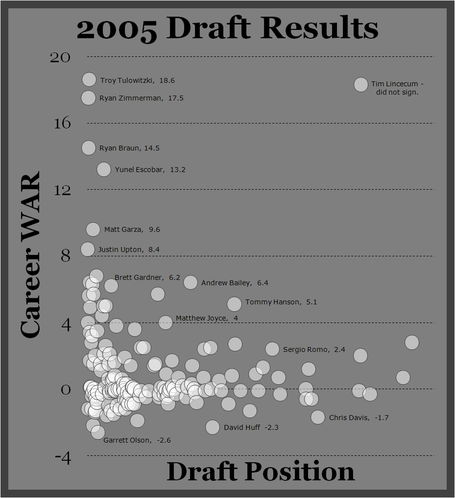 1. Graphic only shows players with that accrued any WAR at the major league level, negative or positive.

3. Tulo and Zimmerman have carved out nice little careers for themselves, huh? They never seem to completely overwhelm me with their yearly counting stats, but we might be looking at a couple of "compilers."

5. Vin Mazzaro (drafted 101 overall), who was recently traded to KC along with Justin Marks for David Dejesus, has more career WAR (-0.1) than Luke Hochevar (-0.6). Hochevar, of course, was drafted 40th overall by the Dodgers, and then 1st overall by the Royals a year later. This isn't a fair comparison, as Hochevar looks to be the Royals opening day starter, while Mazzaro will probably be in the 4th or 5th slot, but neat nonetheless.

6. Looking at the below chart that shows the players divided into either position or pitcher, does it seem the better value later in the draft is at pitcher? The assumption is that one might eventually contribute at least in the bullpen, but it's hard not to notice the mid-round value 2005 had at pitcher as well. 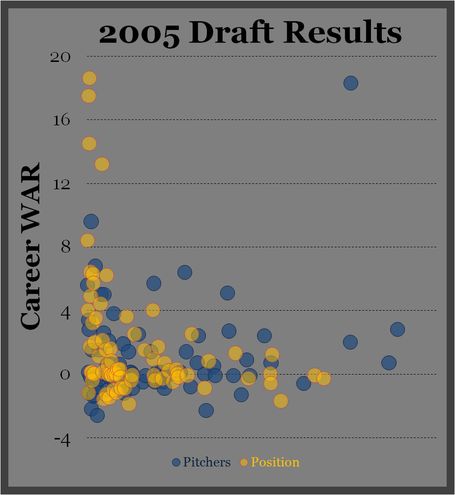 And a generous nod to the DiaTriber for his inspiring work here, for which I also created the visual.