Sometimes You Can Trust Your Eyes: Jeff Bagwell Edition

Share All sharing options for: Sometimes You Can Trust Your Eyes: Jeff Bagwell Edition

A simplistic way to define the debate between traditional and saber-slanted analysts of baseball is that the former "know talent when they see it".  They don't need fancy statistics to tell them that a player was a star.  Why?  Because they saw them play--day in, day out--and could tell that they were different when compared to those they played against.  Now, this is certainly oversimplifies the debate.  In fact, traditionalists like statistics very much--just as long as they are their statistics.  But the question remains can you tell what players are Hall of Fame caliber just with your eyes?  I would argue yes, but it depends on what and how you look at them.

With Bert Blyleven finally taking his place in Cooperstown, Jeff Bagwell appears poised to take Bert's spot as the Hall of Fame eligible player most likely to start a heated debate (although Tim Raines is still making headway on the ballot).  Given his statistics, one would think Mark McGwire would be that player, but interestingly enough people seem to get less excited about the former bash brother these days than Bagwell.  Bagwell did earn 41.7% of the vote a few weeks ago--not bad for his first ballot given the circumstances surrounding the era in which he played.  So does Bagwell pass the Hall of Fame eye test?  I would say yes.  Well, my eye test at least.  So let's visualize Bagwell and see what we see.

If we look at career WAR and OPS+, Bagwell's place among the all-time great first basemen is pretty apparent.  Both OPS+ (adjusted OPS) and WAR (Wins Above Replacement) are excellent, single measures of player performance and provide context around era and ballpark (both of which future HoF candidates will all be examined closely on).  Here's how the current first basemen on the ballot stack up against current Hall members: 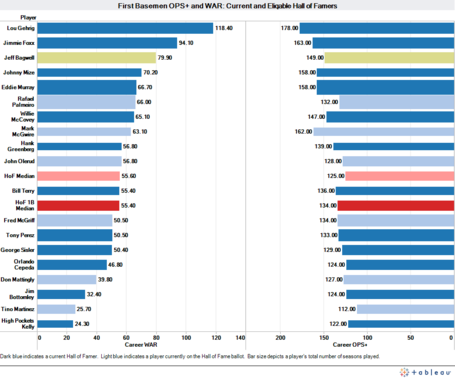 Dark blue bars indicated current Hall of Famers and light blue indicates first basemen currently on the ballot.  The size of the bar is proportional to the number of seasons each played.  According to my eye test, Jeff Bagwell stacks up against the very best first basemen in history.  Period.  When you control for ballpark and league effects, Bagwell sits comfortably amongst the cream of the crop in the Hall.

Bagwell ranks 3rd in WAR and 6th in OPS+ among current and eligible Hall of Fame first basemen.  His Isolated Power is good for 44th all time at any position, 15th among first basemen (>=3000 PA), and 19th overall when you restrict the list to hitters with over 9000 plate appearances.  And as Joe Posnanski has pointed out Bagwell is one of only 16 players that came to the plate over 9,000 times to end their career with an OBP of >.400 and SLG >.500.  That is the definition of elite performer over a significant period of time. 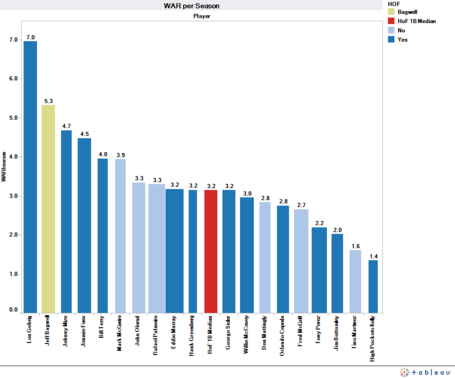 Just to have a little fun I also ranked current and eligible first basemen in terms of their weighted fielding independent hitting (wFIH).  To calculate, I took each hitter's home runs, walks, hit by pitches, and strikeouts and multiplied each by their respective run expectation (see here for the coefficients used).  I then used the basic method for calculating fielding indepedent hitting (HRs+BBs+HBPs)-(Ks)/PA and multiplied the result by 10 just to get the results in a form that looks something like OPS.  I excluded intentional walks because the data wasn't available for all players.  Here's the results: 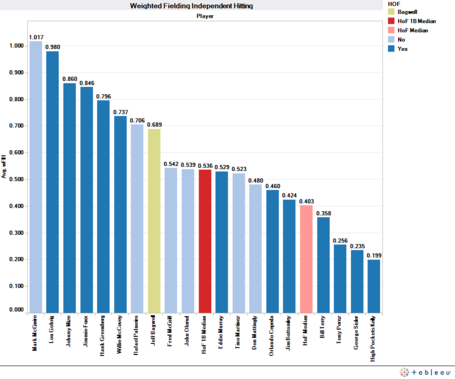 Steve's peice on Blyleven a while back brought up a great point--sometimes you have to speak the same language as your opponent in order to make your case.  So let's leave aside our newfangled numbers and see how Bagwell looks in terms of those traditional statistics. As it turns out, pretty good.

He ranks 9th all-time among first basemen in terms of career home runs (449) and would rank 5th among current Hall members that played first.  He knocked in the 8th most runs among first basemen, 6th among those already in Cooperstown.  When it comes to batting average, Bagwell ranks 31st all-time in BA for first basemen with >=3000 PA.  That ranking shoots to 6th, however, when you restrict the data to those with >=9000 PA.  Oh, and he stole 202 bases with a 72% success rate.  Not bad either.  Compared to the overall Hall of Fame, Bagwell would rank 21st in home runs and 28th in runs batted in out of 125 position players with over 3000 plate appearences.

Bottom line, it is really tough to argue that Bagwell doesn't deserve to be in the Hall.  He was an elite player during his era, and that is frankly the only reasonable way to evaluate players across time.