Share All sharing options for: The Revamped Marlins Bullpen

Larry Beinfest and Michael Hill entered the off-season with a plan. The duo, consisting of two of the smartest baseball guys in the biz, knew they had to address their biggest issue from '10. Not only did they take initiative, but they turned a lousy relief corps in to what is now an extremely viable one. At least on paper that is. With additions of Ryan Webb, Edward Mujica, Randy Choate, Michael Dunn, and even Dustin Richardson -- It's certainly an improvement.

Here's a list of the Marlins projected bullpen. Keep in mind, the bullpen will consist of seven relievers whereas there are eight in this picture. I'm just showing the overview of the possible relievers plus their projected FIP's per Bill James. The empty box with the "3.83" FIP at the end is the combined/average FIP of the eight: 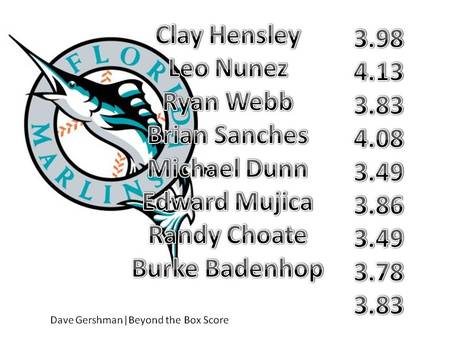 Starting off with the one who's least likely to make the Marlins Opening Day roster; Dustin Richardson. Of course, after the Red Sox acquired Andrew Miller in exchange for D-Rich, many credited the Red Sox because, well, they are just the Red Sox. Although Richardson is the more likely of the two to succeed at the Major League level. Despite only pitching 16.1 innings in the Majors, he really has not done much of anything throughout that small sample size. However, as recently as last season, Richardson sported a 10.3 K/9 in Triple-A Pawtucket along with a 3.95 FIP in 44.2 innings pitched.

Ryan Webb on the other hand has one of the best sinkers in the game and has found some success at the Major League level. Posting a 2.82 FIP in '10 and earning his team almost a whole win in only 55 innings show that he might be a really nice fit with the Fish. the 6'6 right-hander also sported a 3.68 GB/FB with that devastating sinker, a 3.9 runs above average pitch. Furthermore, he also throws it at an average of 94.9 MPH. Webb was brought to the Marlins along with Edward Mujica in exchange for Maybin, another guy who fans raved about after the trade.

The aforementioned Mujica is another underrated power arm who looks to be a solid component in a revamped Marlins pen. Not only does Mujica have one of the best splitters in baseball (five runs above average), but his fastball is even better, 5.7 runs above average. Bill James expects him to regress though. According to James, Mujica will punch out less batters than he did in '10 and walk more as well. Being a guy who has always been able to get more ground balls than fly balls, his 2010 FIP of 3.88 shouldn't get that much higher.

Thus, those are just a few of their many additions. The next question being asked is whether or not Leo Nunez will have another late-season breakdown. With a new and improved bullpen to go along with a better and more mature rotation, the Nunez's workload will be decreased. So we will see what happens there. Also, unless Mike Dunn fulfills his 6.62 projected BB/9 and completely shows he isn't deserving of making the team, or any other projected Marlins reliever does so, Burke Badenhop, Brian Sanches, and Clay Hensley are expected to fight for two spots with Richardson in the mix.

So as I said previously, Dunn's 2010 WHIP (1.68) was dreadful despite a swing-and-miss fastball that averages 94.8 MPH. Each one of these pitchers has a certain flaw. However, their new and improved bullpen is by all means remarkably better on paper than they could say it was last year at this time. The main problem is, the mainstays. In other words, the returning relievers who are all coming off very good seasons. Especially Hensley who struck out over a batter per inning as well as posting a 2.87 FIP. More importantly though, they added a veteran lefty and possess a few veteran righties, something that could benefit what is an inexperienced bullpen. Especially with Ryan Webb and Michael Dunn looking to pitch full seasons for the first time in their career.

All in all, expect improvement out of the new Marlins pen. As the chart shows, the bullpen would be better if Badenhop and not Sanches was in it. However, the Marlins management will likely mix and match throughout Spring Training to find the right fit for each pitcher. One thing that can definitely be said, the Marlins bullpen will be a lot more fun to watch this year than it was last year.