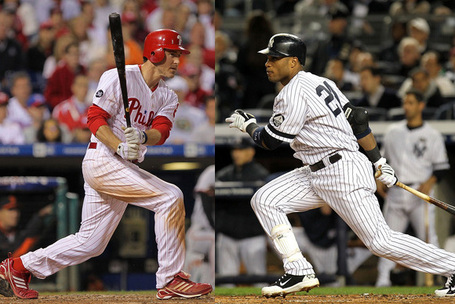 Welcome back to the BtB Mailbag, where we take our best shot at your best questions. Send your questions to btbquestions@gmail.com and provide your name for inclusion.

This week's question comes from a Met fan trying to defend a Phillie in a quarrel with a Yankee fan - an excellent argument to get in the middle of.

John asks: I'm an avid Mets fan from New York. I've been a BtBreader for awhile now and I check it daily, and I think all of your writers are intelligent and knowledgeable baseball fanatics, so naturally I trust you guys with my burning questions. Here is my question for this week:

I believe Chase Utley is both offensively and defensively superior to Robinson Cano, however one of my best friends is a die hard Yankee fan and refuses to agree with me. He says I am crazy to think that and refuses to listen to me when I reference statistics to prove my case. My question is...what is the most basic way to prove that Chase Utley is more valuable and effective a player than Robinson Cano without having to use statistics that will confuse my friend?

Thanks very much John. My first suggestion would be to not have crazy die hard Yankee fans as friends, but let's move past that and get to the issue.

Cano is almost four years younger than Utley, and so is more likely to be in the prime years of his career. That might muddy up the questions of what "is" is, so I thought I'd compare them in three parts; career numbers, 2010 numbers, and a weighted average of the last three years (like a very simplified Marcel projection). Nothing too fancy; just your standard slash stats and their walk, strike-out, and home run numbers on a per season type rate basis.

Seems pretty easy to me to say that Utley has been the better hitter over the course of their careers. He gives up less than 20 points of batting average, but walks about twice as much so that his on-base percentage is far superior. Cano just makes more outs than Utley here - around 20 extra outs per 600 plate appearances (I used 600 PA as the baseline for playing time even though both guys have averaged a higher number since they became starters.) That's almost a full game worth of outs each season difference between the two. Utley does strike out more (which, along with a lower BABIP - .314 to .322 - is what helps push his batting average down), but he's also done more damage with the longball.

Last year Utley was hurt and missed a fair number of games, but his production even when on the field wasn't up to his usual standards. He cut down on his strike-outs, but a drop in BABIP (.288) and fewer balls leaving the yard resulted in a fourth straight season with a declining batting average. He still walked quite a bit though, which kept his on-base percentage (slightly) above Cano's despite a 43 point disparity in the average department. The power output was flipped (big edge to Robbie), which made Cano more productive at the plate overall. Score one for the Yankee fan.

Cano strikes out less and has more hits fall in when he puts the ball in play, which leads to a higher batting average. Utley has more power - hitting more home runs (also higher isolated power) - but the difference in number of hits per at bat balances things out when it comes to slugging percentage. Both are very dangerous at the plate, with Cano more likely to get a hit but doing less damage on a per hit basis, which doesn't seem unreasonable to say. Utley, though, just walks much more. That means he's making many fewer outs, and the gap is actually bigger than when looking at their careers (Chase has upped his walk rate to over 12% in recent years). Outs are bad, and Utley is just plain better at avoiding them while also punishing the ball with the bat.

I can understand why Cano might seem like the more dangerous hitter, since he's more psychically imposing (he's listed as weighing in 13 pounds more than Utley but is an inch shorter - and I think the gap might be larger than that). Also, since he's putting the ball in play more it looks like he's being more productive instead of jogging down to first-base on a free pass (a line-out* to the second-baseman sure looks more dangerous than a walk).

* Imperfect data, but FanGraphs actually has Utley with the higher career line-drive rate, 21% to 19%. Utley also hits more flyballs than groundball, while the opposite is the case with Cano. They might have similar home run power at this point - Cano's HR per FB rate is higher than Utley over the last two seasons, but he just doesn't elevate the ball as much.

If no fielding statistics whatsoever will do the convincing, how about people's eyes* (instead of just a single person's)? The 2010 Fan Scouting Report has Utley a little ahead of Cano, due largely to better instincts (not too hard to believe, right?) and speed (about 14 stolen bases per season compared to 3). Cano is rated as having a stronger arm, but there aren't a ton of exceptionally long throws at second. The gap between the two was even larger in 2009, but the fans say that Cano improved a fair bit. That Utley has never won a Gold Glove but Cano has is both a travesty and not evidence of the latter's superiority.

* Never mind that some of the referenced stats involve people actually watching every play by each player.

* Can't talk about Chase Utley being awesome without linking to this. (Youtube for the video - totally worth it.)

** Maybe - I have no idea why one would think Cano is the better fielder.

*** Bonus stat: Cano's career high in fWAR was 6.4 in 2010. That would rank as Utley 6th best season, though there is the AL/NL disparity thing in play.

If Utley doesn't bounce back at the plate - while Cano maintains his production from 2010 - then we'll need to revisit this and perhaps give the Yankee the edge. If someone wants to take up the banner for Cano right now though, I'd be glad to hear the arguments.