Do pitchers adjust to a batter's weakness? A look at how pitchers have adjusted to David Wright.

Share All sharing options for: Do pitchers adjust to a batter's weakness? A look at how pitchers have adjusted to David Wright.

Every Pitcher seems to have a strategy that they follow throughout the season.  These strategies tend to be tailored to an individual pitcher's strengths and weaknesses: pitchers will throw their best pitches in pitcher's counts and will aim for spots that they know they can hit with ease.  The patterns of individual pitchers can be seen from their pitches over an entire season with ease, allowing pitchf/x analysts to look at pitchers and understand what they're doing.

But this raises a question: if pitchers simply tend to follow their own set strategies, do they not try and adjust their aim and the use of their repertoires to attack the weak spots of hitters?  If a pitcher, who normally throws inside more-or-less exclusively, faces a batter who crushes inside pitches but is weak against outside pitches, does that pitcher not adjust his strategy to try and hit the outside target?  Or are pitchers inflexible in how they attack batters, sticking to their set strategies no matter what?

To examine this question, I'm going to take a look at David Wright, a pretty good hitter (and probably the best hitter on his team) who happens to have a "hole in his swing" that makes him weak against pitches thrown in the outside part of the strike zone (You can see this in figure 1 above).  This weakness is over 2 years old, so it should clearly be in a pitcher's scouting report.  So have pitcher's adjusted to attack the weakness?  And how quickly have they adjusted?  After the Jump I'll take a look.

To look at how pitcher's adjust, let's first take a look at how the pitchers who faced David Wright in 2009-2010 pitched to all right-handed batters: 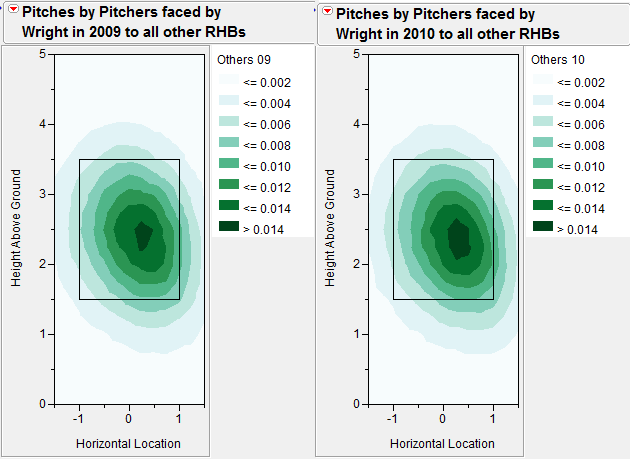 Figure 2: A look at how the pitchers who faced David Wright in 2009 and 2010 pitched against other right-handed batters.  The darker the color green, the more frequently pitchers hit that location in the zone.  The graph, like all other graphs, is shown from a catcher's point of view, so the positive numbers represent areas that are farther and farther outside, while negative numbers show pitches that are inside.

As Figure 2 shows, these pitchers approached right-handed batters much the same way in 2009 and 2010: by aiming outside and a tiny bit low in the strike zone.  This would of course, be a good way to approach David Wright, so we would expect pitchers to simply stick to this pattern when facing David Wright, and to perhaps concentrate their pitches even more frequently in that outside location as they adjust to the scouting report. 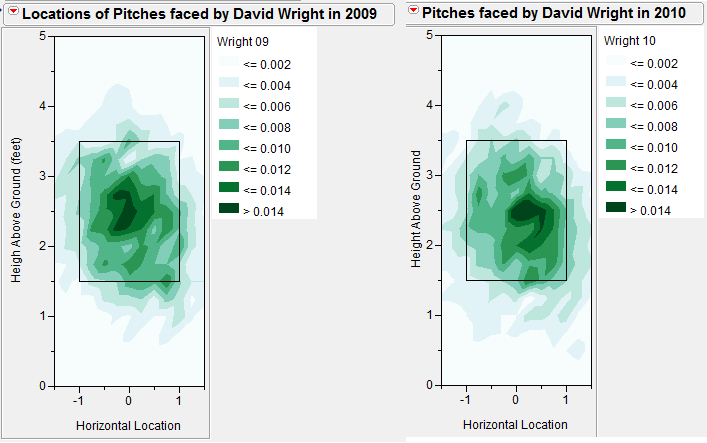 Figure 3: A look at how the pitchers pitched against David Wright in 2009 and 2010.  The darker the color green, the more frequently pitchers hit that location in the zone.  The graph, like all other graphs, is shown from a catcher's point of view, so the positive numbers represent areas that are farther and farther outside, while negative numbers show pitches that are inside.

Now this is interesting...in 2009, pitchers seemed to locate their pitches INSIDE rather than outside against David Wright.  That's not what we'd expect if they simply stuck to a standard strategy, or if they knew of David Wright's weakness.  Now Wright didn't truly punish inside pitches until 2010, but it's clearly not what we'd think of as an effective way of approaching David Wright.

But in 2010, this changed.  Pitchers started to locate pitches away from David Wright, in an area much closer to Wright's weak spot (though this concentration also seems to cover a little bit of the center of the strike zone).  This would be what we'd expect if they had looked at Wright's scouting report and adjusted their strategy to attack him. So Pitchers, at least in the case of David Wright, DO seem to adjust their strategy to fit the batter they're facing.

Now there's one more question here...how quickly do pitchers adjust to a batter's weakness?  Surely Wright's weakness was known by at least mid-season in 2009?  Well so let's look at how pitchers approached David Wright in the first half of 2009 as compared to after June 30th: 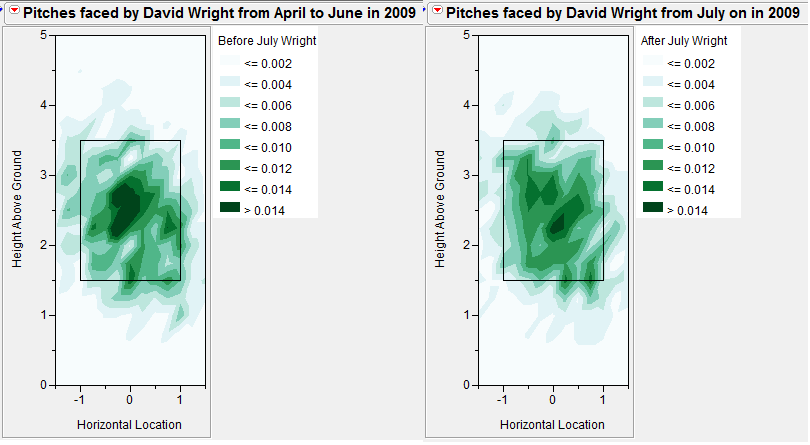 Figure 4: A look at how the pitchers who faced David Wright in the first half of 2009 as compared to the second half of 2009.

Figure 4 shows that pitchers did indeed start to adjust after June 30th of 2009.  Before July, pitchers threw, as we stated before, and located their pitches a little inside and middle high.  From July onwards, the pitches against David Wright started to be located a tiny-bit outside (though still in the middle of the zone), with a small concentration inside and high.  This inside and high zone, if you look at figure 1, is also where David Wright has had some trouble.  So it certainly seems like pitchers started to adjust, even if the trend isn't so clear.

This article has only taken a look at pitchers' approaches to one batter: David Wright.  I'm curious to see how pitchers' adjusted to other batters, perhaps those who weren't the only great hitter on their own team.  Of course the example of David Wright is pretty obvious for me, a Met fan, because I was so aware of the hole in his swing. So what I really need to know is who are other hitters who have similar issues with parts of the strike zone, especially those whose issues have only emerged over the past year or two.

So please in the comments or through twitter (You can reach me @garik16), please let me know of any such batter who fits that description.  That way we can truly see how well pitcher's adapt their strategies to target a hitter's weakness.