Benefit of the Doubt: Fuzzy Corners

Share All sharing options for: Benefit of the Doubt: Fuzzy Corners

Today's episode of Benefit of the Doubt takes a look at the relationship between the perspective of the umpire, the location of the pitch, and the likelihood of error and degree of bias.

While some sources of umpire error are rather confounding, some are far more intuitive. Take, for instance, the distance between the umpire's eye and the location of a pitch. Umpires tend to position themselves over the inside part of the plate (this provides more protection from batted balls), putting themselves at a disadvantage when calling outside pitches.

We witness the same effect when it comes to the height of the pitch: the farther away from the ump's eye when the pitch crosses the plate, the more likely the umpire will make a call that is inconsistent with that of the Pitch F/X system.

However, error does not necessarily translate into bias. Depending on the distribution of error, we may or may not observe a pro-pitcher or pro-hitter bias.

The distribution of error is key when it comes to location and bias. See again the horizontal location chart, where the errors tend to peak right around the legal zone's boundaries. In contrast, peak error vs. vertical location occurs well within the boundaries of the zone. This is important: error inside the zone necessarily means a that strikes are turning into balls, and therefore the hitter is gaining an advantage; conversely, error outside the zone indicates a pitcher bias and, thus, an increase in Zone Advantage.

The chart below corroborates these findings:

As always, positive zone advantage indicates a bias in favor of the pitcher, negative in favor of the hitter. In both the horizontal and vertical diagrams, there are noticeable peaks and valleys. However, it's important to note in the horizontal chart that the Zone Advantage peaks around 15-20% and bottoms out around 10-15%. In contrast, Zone Advantage peaks at about 10% and bottoms out around 15% on the vertical chart.

What this tells us is that the umpire's tendency to err on the horizontal axis benefits the pitcher, while errors on the vertical axis tend to benefit the hitter.

See below the same effect in two dimensions. 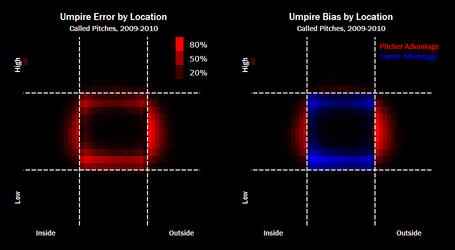