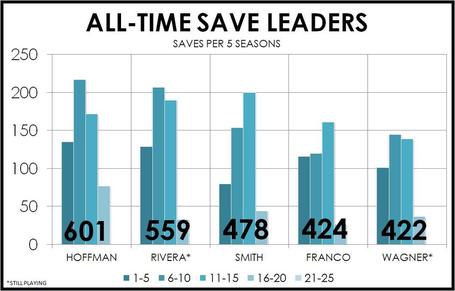 "Saves" have been properly dismissed at this point, at least by this audience. Regardless, as long as managers inexplicably keep their best relievers for specific situations, we'll continue to count the times it succeeded. And that brings us to Trevor Hoffman's retirement.

Hoffman had an unusually long career of 18 seasons, but averaging just 72 innings per year has a way of doing that. He was especially effective when given the chance, and per the visual, saved more than 217 games over a 5-year span (years 6-10). That averages out to 43 saves per year for the period -- no small feat.

Of course, the ascendancy of Mariano Rivera has pretty much blanketed Hoffman's career, so never mind that Trevor (think he'd like to be "Mr. 601?") will probably have to relinquish the saves crown to him in little more than a year. Never mind that his 3.69 K/BB is more than a touch behind Rivera (3.94), and never mind that his WHIP is good (1.058) but not shocking (1.003). Still, something has to be said for length Hoffman's career. Just don't mind that Mariano is only two years behind after starting two years later (and unfairly played on better teams throughout).

And with a dubious statistic, an almost-certainly short-lived crown, and the same man that overshadowed his entire career coming to take it, the least we can do is save this moment for Hoffman.