The Importance of an Effective Fastball

Share All sharing options for: The Importance of an Effective Fastball

Lately, I've been contemplating whether or not a starting pitcher really does need power stuff to be an above average Major League pitcher let alone surviving in the big leagues. In the 20th century, it was a god-given gift if you were able to throw a fastball ranging in the low 90's range. Now, if you don't throw a fastball harder than 93 miles per hour, you're at times considered a below average pitcher. But is that really the case? Are pitchers who do not throw 95 not good pitchers? I think not. You see, one of my favorite sabermetric statistics is "w" preceding a certain type of pitch. "w", again, before a type of pitch indicates the runs above average that the certain pitch is worth. Thus, wFB denotes the effectiveness of a fastball due to again, the runs above average it is.

So I created a chart indicating the top wFB by pitchers with a mininum of 700 innings pitched including their respective fastball velocity over that span as well; and I'll tell you what, you'd be surprised by what the true meaning of a super-effective fastball is: 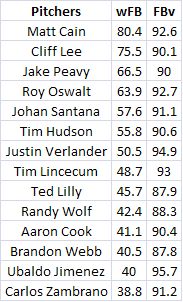 Thus, the average fastball velocity of those 15 pitchers over the 5 year span is 91.1. The point I'm trying to make here is, you don't need to throw hard to be a successful Major League pitcher. As seen in the chart, only two of the aformentioned pitchers has a fastball velocity over 93, and one of them exactly at 93. Another thing, more than half of these guys are pitch to contact guys, where they thrive on getting a ground ball in order to record an out, which makes that fastball even more valuable. Some of these guys throw a sinker as well, which obviously is a ground ball pitch known to keep the infield defense on their toes.

In my opinion, you don't need to throw hard to be successful, and many flame throwing power pitchers's K/BB ratio is overlooked as well as their FIP. See Jose Valverde for example. Of course his split-finger pitch is one of the best of it's kind around, and his fastball ranges anywhere from 95-98, but his 4.57 BB/9 isn't so attractive, nor is his 3.78 FIP especially being a closer on a team with a a very good bullpen otherwise.

Furthermore, a fastball needs to be commanded more than it needs to be thrown hard as the chart shows. Overall, I'm just trying to prove that you really don't know what a good fastball is until it's either fielded or used to record an out. All of the "ooh's and ahh's" after Chapman throws 103 down the middle - thats fantastic, but what does it matter? Unless it records an out or proves to be a useful pitch to help the team record a win what does it mean? Obviously, Chapman did and will use that fastball to help nab a win for the Redlegs, but a majority of the aformentioned pitchers in the chart throw a fastball which again, is a pitch to contact type of weapon that gets groundballs. Thus, it obviously depends on your defense, but each defense of these pitchers can have a case made for not being defensively sound or the other way around.

These are all or were all successful pitchers at a certain time and many still are, giving them the upper hand with more than just their fastball, but their fastball primarily is one they have the best command of, and great command at that. However, This is not to say that harder throwing starting pitchers who have less command can't succeed, but it's simply not as easy as results in the past have clearly proved, such as this.