The Braves' bullpen was definitely one of the strongest in the league last year.  Their collective ERA was second to the Padres and Giants, and they trailed only the Padres in FIP, xFIP, and wins above replacement.  Veterans Billy Wagner and Takashi Saito were a huge part of this, as they both posted ERA/FIP/xFIPs under 3 over a combined 123 1/3 innings of work.

Another dominant reliever out of the Braves' bullpen last year was rookie Jonny Venters, who made his major league debut against the Rockies during Ubaldo Jimenez's no-hitter on April 18th.  The 25-year-old southpaw threw 83 relief innings last year and turned in 1.7 WAR, on par with elite closers Mariano Rivera, Neftali Feliz, and Rafael Soriano.  It would appear that Bobby Cox gained confidence in Venters throughout the year as he let him pitch in more high-leverage situations as the season went on.  The graph below illustrates this in the form of cumulative player leverage index (in which a "neutral" situation is 1).

The next question would be: what did Cox like so much about Venters?  Before I look at his stuff with PITCHf/x, I will present a table that shows Venters' 2010 performance and, in the form of a percentile, how it related to other pitchers with a minimum of 1,000 pitches thrown.

Other than suspect control, Venters has the qualities of an excellent relief pitcher, producing a ton of whiffs, swings out of the strikezone, strikeouts, and groundballs.  Venters led the majors in groundball rate and was second in whiff rate to Carlos Marmol.  Venters' repertoire is conducive to excelling in both of these categories, as last year he primarily used a mid-90s sinker and a mid-80s slider with great movement.  Venters also throws a four-seam fastball; he showed a changeup last year, but ditched it in May.  The charts below show the spin deflection from the catcher's perspective for each pitch and the velocity distribution for each pitch.   (click to enlarge) 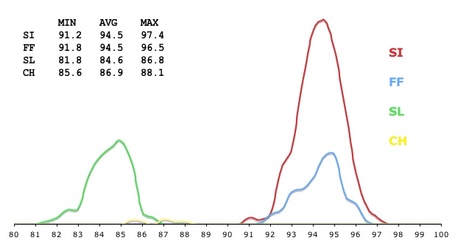 Venters' sinker drew rave reviews from teammate Billy Wagner, who said, "There's never been anybody in the game that's had a left-handed sinker like that.  I mean nobody."  The pitch had a pfx_z (vertical spin deflection) value a bit greater than 3 inches, which means that it dropped about a half a foot more than the typical fastball.  And since it sits 94-95, there's not a whole lot of time for hitters to react to pitch's break.

Next up are some results for Venters' pitches, excluding the changeup that was only thrown 13 times.  It's awesome if you know what all of these metrics mean, and if you don't, that's okay too - use this old post as your glossary.
A few things in particular caught my eye.  Nothing is in the strikezone a whole lot, not even the four-seamer.  Overall, the four-seamer looks like his weakest offering, and it still generates a whiff rate well above average for its pitch type.  The sinker and the slider are absolutely filthy.  Unsurprisingly, given the metrics I showed on Venters earlier, the sinker and slider are both spectacular at getting grounders and whiffs.  The sinker was hit into play 143 times last year, and three-quarters of the time, it endangered a worm.  When swung at, it was missed nearly 30% of the time, which is well over the league average for sinkers/two-seamers.  In a much more limited sample of 38 balls in play, the slider induced a grounder two-thirds of the time, which is still spectacular.  However, the thing that most caught my eye was the whiff rate on Venters' slider.  Over the 125 swings that batters took against Venters' slider, they came up empty 82 times, which makes for an insane .656 whiff rate.  Anything over 50% is elite, and I can only think of a few pitches that are in the category of Venters' slider.  Ryan Madson's changeup was just about as nasty, garnering a .645 whiff rate over 138 swings; last year, Brandon League's splitter posted a mark of .683 over 183 swings.  The high watch rate would mean that on the off-chance that the slider is in the strike zone, batters take it for a strike more often than not.  The slider looks like an oustanding pitch in every way.

Before I move on, I'll give you a "bonus graph," if you will.  It shows the plate locations in feet, relative to the batter's strikezone, for Venters' sinker and four-seamer (the lines have been smoothed to better accentuate the trends).  As you can see, the sinker usually crosses the plate at the bottom of the zone, while the four-seamer is more often than in the middle third.

The next thing I'd like to look at is Venters' pitch selection based on count leverage.  He likes to throw the sinker a lot in any count; the only time he'll throw a lot of four-seamers are in 2-0 and 3-0 counts.  With two strikes, you'll probably see either a sinker or a slider.  The chart shows the pitch selection based on each count, and the tables break it down by batter handedness. 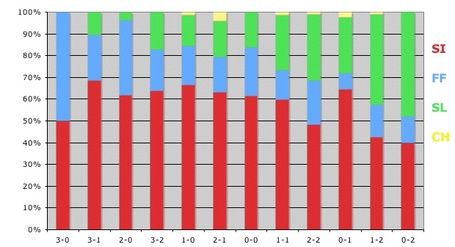 Hopefully this has given you a pretty good idea of what Venters has to offer.  He'll usually go after hitters with a viscous sinker in the mid-90s, and if he chooses to, he can also put them away with one of the best sliders in the majors.  When hitters aren't missing against him, they're pounding the ball into the ground.  His control isn't great, but he makes up for it by keeping balls out of play and limiting home runs.  Overall, he looks like an elite reliever, and he will be given the chance to compete (along with Craig Kimbrel, whom I briefly profiled last week) for the Braves' closing job this spring.

PITCHf/x data are courtesy of Joe Lefkowitz's tool.  Other data are from Fangraphs.