In part two of my series on volatility I looked to see whether David Wright's perceived volatility in 2010 was simply the function of having a down year. I compared Wright's volatility to two other third basemen with similar seasonal statistics (e.g. wOBA, OPS, etc) and it turns out that he was more volatile.  In order to further tease out whether there is something to Wright's volatility (and volatility in general) I decided to take a look at a larger sample of players (24 to be exact--here's a list of the players).  Two interesting things quickly emerged:

However, this is only part of the story.  But before I get to the gory details, let's start with Wright.

Since 2007 Wright's seasonal wOBA has steadily decreased (although it did rebound a bit in 2010).  At the same time, his volatility (the standard deviation of his 10-game wOBA average) has increased.  At first glance this seems intuitive--as a player's performance decreases so too should their reliability.

To get a better handle on whether this pattern is to be expected I took a look at 23 players in addition to right Wright and their volatility during the 2010 season.  The sample includes players with >=500 plate appearances.  The sample is still small, but includes a good balance of seasonal wOBA.  When I plotted in-season volatility against seasonal wOBA I got this (click to enlarge): 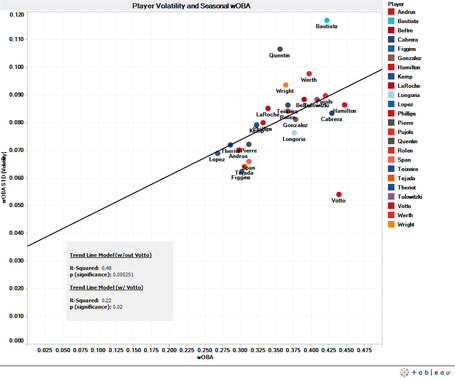 We see a positive relationship between seasonal wOBA and volatility.  (You can also look at a comparison of each player's Volatility Range here).

After some thinking, this makes sense as better players are more likely to have high-performance games while lesser players won't.  So if that is true, what else might be accounting for the variation in volatility?  After a few different iterations and combinations, I ran a regression adding batting average on balls in play (BABIP), strikeout percentage (K%), and park effects (Park) to wOBA.  I also removed Votto from the sample due to him being such an extreme outlier.  Here's the results:

Significant at the .01 level

The model basically accounts for 81.5% of the change in volatility from player to player.  The two most important factors based on coefficient size are seasonal wOBA (positive relationship) and BABIP (negative relationship).  In fact, if we hold all other factors constant, a 1% change in a player's BABIP will alter their volatility about 418% more than a 1% change in their K%.  In other words, BABIP moves the dial on volatility.

Now, if you are a GM it's rare that you would purposefully try and sign a free agent with a lower wOBA just because you were interested in a lower volatility player.  But what you might do is put extra weight in a player's BABIP and K% when deciding between two players with similar wOBA.  In particular, BABIP--if one can predict it with some degree of confidence--should be the focus.  Certainly in a perfect world you would look to obtain a player with a high BABIP and a low K%, but in reality a GM must often make a trade off.  Understanding the relative impact of these two factors on a player's volatility can be useful when evaluating current players or potential aquisitions.

Let's return to Wright and add Expected Volatility to the table above:

If the model is correct (and at this point that has not been confirmed, only suggested) than Wright's volatility increase may be attributable to factors such as injury or bad luck (not captured by the model) than some underlying fundamental.  His 2009 season in particular was 32% worse than was predicted (all other seasons were basically within 10% of predicted volatility).  And here's the irony--Wright's apparent increase in Volatility led me to a possible formula for explaining Volatility which, when applied to Wright, suggests his apparent Volatility the past few years might just be more fluke than anything else.  You have to love sabermetrics.

There is obviously a ton more work to be done here.  Given the small sample this is just a start, but it is suggestive.  I hope to re-run the analysis with a much larger sample (both in terms of number of players and years) in the not too distant future to see if the relationship holds.