Share All sharing options for: 2010's Best Base Runners 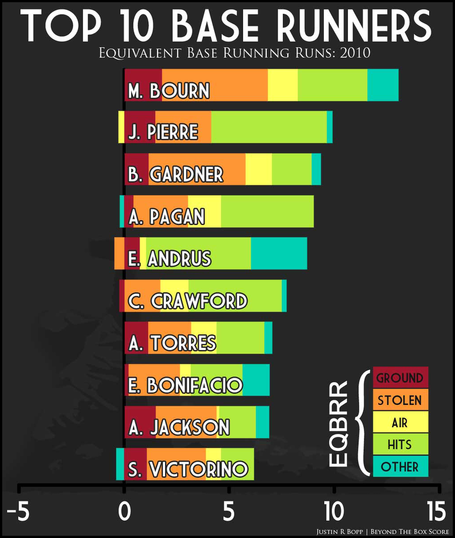 Equivalent Base Running Runs. Measures the number of runs contributed by a player's advancement on the bases, above what would be expected based on the number and quality of the baserunning opportunities with which the player is presented, park-adjusted and based on a multi-year run expectancy table.

1. My favorite thing about EQBRR is that stealing bases is always revealed to be not the most important component of a good base runner. While for most of our readers this is a known, the important part for those new to sabermetrics is the realization that stealing bases is a risky proposition that can (and often) hurt the team more than it can help. In fact, the generally accepted rate of base stealing success (SB/CS) required to make the effort worth it is north of 70%.

2. The next best realization is that the most value (at least in this amount of selected data) comes from a player stretching his own hits into extra-base affairs. A great example of this is Elvis Andrus, who hurt his value by getting caught stealing a touch too much (SB/CS = 32/15 = 68%) but more than made up for those few blunders by stretching his singles into more.

3. Michael Bourn: the preeminent base runner. He runs out weak grounders and beats the throw, he stretches his hits as far as possible while knowing when to pull up (and avoid an out), he times his tag up after a fly-ball out impeccably, and he takes advantage of his opponents mistakes with his blistering speed. It's a shame he's not a better hitter.