In my first column on player volatility I took a look at David Wright's in-season performance over time.  The idea was to begin (and I stress begin) teasing out this idea of how an individual player's performance varies from game to game (or stretches of games).  Originally I took the 10-game moving average of a player's daily Win Probability Added. I then stripped out the leverage from WPA to see if that drastically affected Wright's volatility.  Turns out the story looks pretty much the same.  Wright's volatility has increased since his peak season of 2007.

The post generated some very helpful comments, both here and at other outlets that linked to the analysis.  As a result, I've decided to calculate volatility using Weighted On-Base Average (wOBA) going forward.  wOBA is a metric that combines the weighted impact of offensive actions by a hitter.  We know that the weighted value in terms of runs produced for home runs is greater than for singles, so wOBA takes that into account.

Now, the first cut only looked at Wright in isolation from other players.  So let's take the next step and compare Wright in 2010 to two other third basemen with whom he shares similar seasonal statistics.  Rolen and Wright had virtually the same wOBA (.364 and .367), with Longoria a bit better than both at .376.  Additionally, OPS+ for each player is very similar (with Longoria having the edge).  By controlling for seasonal performance we can get a sense of whether volatility can simply be explained away by overall performance, as some have suggested.  For this comparison I used the linear weights for 2010 to generate each player's daily and 10-game average wOBA.

Here's how the three third basemen stack up: 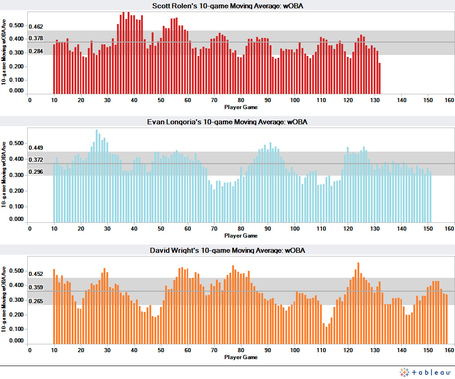 For reference, here's Wright's 2005-2010 seasons after they were run again based on wOBA.

The grey band represents the first standard deviation of each player's 10-game wOBA--68% of time their 10-game average wOBA will fall within this band.  The grey line represents each player's average 10-game wOBA.  At first blush we see that even amongst players with similar seasonal statistics (in some cases, identical statistics) we find different levels of volatility in daily performance.  Wright has a wider band--i.e. volatility--and he has deeper valleys compared to the other two third basemen.

Another way to see the difference is to look at each players' Volatility Range--the first standard deviation of a player's 10-game wOBA moving average--graphically:

Each bar is centered at the player's 10-game wOBA average and the height of the bars represents their Volatility Range.  Notice how Wright's bar is longer than either Longoria's or Rolen's.

Looking at things numerically, the point is really driven home (click to enlarge):

Wright has a higher standard deviation in terms of his 10-game moving average wOBA.  This means that for any given 10-game stretch, Wright's performance is less reliable than the other players.  Wright's Volatility Range is 18.5% larger than Longoria's and 11.2% larger than Rolen's.  Additionally, Wright has more 10-game averages that dip below .300 wOBA (41) than either Longoria (25) or Rolen (19).  Wright also had 9 10-game stretches were he averaged <= .200 wOBA.  Neither Rolen nor Longoria had a single one.

So what does this tell us?  The small-N comparison isn't definitive by a long shot, but it does suggest that even players with similar seasonal performances can exhibit different levels of volatility.  However, the sample was only three players.  What happens if we look at  a larger sample?  In my next column (Tuesday at 11am EST) I will look at an extended sample that will include players with both high and low wOBA in order to further tease out if volatility is simply a reflection of overall performance.  I don't want to give it away, but there's definitely something happening here.  However, the relationship between wOBA and volatility is somewhat counterintuitive and seasonal wOBA is only part of the story.  When comparing similar players, other factors appear to be driving the extent to which they exhibit volatility.