Hall of Fame Catchers: A Timeline

Share All sharing options for: Hall of Fame Catchers: A Timeline

I've been experimenting with visualizing a timeline of Hall of Famers. Basically, I want to find eras that tended to have more Hall of Famers, more at certain positions, and which eras had better players. Here's a test run, just using catchers.

Hall of Fame Catchers Over Time

So, each block starts in the player's first year and ends in the last year. The height of the box is dictated by career WAR. That's why Ray Schalk is short and Johnny Bench is tall. I'll probably have to experiment with this some more, because right now it makes Carlton Fisk look more valuable than Bench (simply because he played longer).

Continue reading for another version of the graph and some more thoughts.

I love catchers, so it's always bugged me that there were relatively few in the Hall of Fame. Plus, there are at least two (Schalk and Rick Ferrell) who don't deserve to be there. I've identified a half dozen catchers who have excellent Hall of Fame cases. I'm not saying they all should be in there. I'm just saying they deserve more of a look. Here they are integrated into the above graph:

Hall of Fame Catchers (plus six others) Over Time 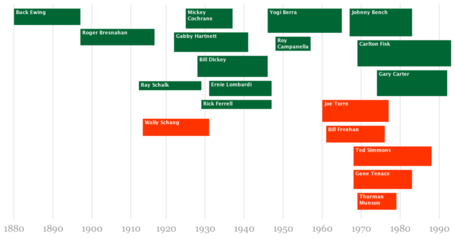 If, like I'd like to do, you remove Schalk and Ferrell, Wally Schang fits nicely in there as the bridge from Bresnahan to the Cochrane/Hartnett/Dickey/Lombardi crew. I could even go either way with Lombardi. I'm fine with him being in. He's just the borderline.

The other five catchers all have overlapping careers, though. And they also happen to overlap the three greatest catchers of all time—Bench, Fisk, and Carter. Talk about a Golden Age of Catchers from the mid 1960s to mid 1980s. These are all damn good catchers, too, as evidenced by the height of their respective boxes.

Honestly, I'm a bit surprised Joe Torre and Ted Simmons are not in. They seem to have the old school stats covered. Torre will get in as a manager, but he's going to fall into the John McGraw category of Hall of Fame-caliber players who are forgotten because they became Hall of Fame managers.

Schang shouldn't be a tough sell. He had a .393 OBP and was clearly the best catcher that bridged the Bresnahan-to-Hartnett gap. Munson has his supporters, but he benefits AND suffers from being a Yankee. Yankee fans overrate him and non-Yankee fans underrate him because Yankee fans can't shut up about him (see Mattingly, Don). Freehan and Tenace are non-traditional Hall of Famer that would be incredibly sought after players if they played today.

I'm still curious about those thinner spots—the pre-1920 and 1945 to 1965 eras. Who were the best non-Hall of Famers during those times?

Compare that to 1965 to 1990. Is it a problem that there were so many near-Hall of Fame catchers? Should more be put in? Keep it as is? What do you think?