In parts 1 and 2 of this series of articles, I discussed Tim Wakefield, the established knuckleballer, and R.A. Dickey, who looks like the heir apparent to the knuckleball tradition.  However, Dickey isn't young (He's 35, going on 36 in October) and there is the possibility that this year is a fluke.  I don't think it's a likely possibility, but it is there.  Regardless, he clearly won't have as long a career as Wakefield simply because of his age.

So who will take over the knuckleball tradition after Dickey?  The obvious answer is 26 year old Charlie Haeger, a knuckleballer who saw major league time this year with the Dodgers.  Haeger was not particularly successful this year, and I want to look at why that is, how he can improve, and what his probable ceiling is (does he compare better to Wakefield or Dickey?).

Haeger came up last year at the end of the year and threw 307 Pitches.  This year, he started as the Dodgers' fifth starter and threw 654 pitches before being sent down.  His performance both years was a little erratic:

No, those are not good numbers.  Particularly ugly is the BB/9 in 2010, which has more than doubled.  Now, obviously, we're dealing with very very small sample sizes here.  Still, it's  not what we would like to see from the a guy who might be the future of the knuckleball tradition.

So let's look at his pitches over the last two years:

Table 5:    A breakdown of the movement of Haeger's pitches each of the last two years.

I've listed Haeger as having three pitches.  However, reports have only talked about him having two: a Fastball and the knuckleball.  That said, there's a cluster of pitches both years (over multiple starts) which are faster than the knuckleball and slightly slower than the fastball that tends to have slider/cutter-like movement, (On Average around 0 Horizontal Spin Deflection and +2 Vertical Spin Deflection).  These pitches tend to be thrown on some not-great-for-a-pitcher count (2-0, 2-1, 3-1, and 3-2 in particular) which is even odder.  I've classified those pitches in each Table and Figure as "Unknown" but if i had to guess they're either a cut-fastball (either by accident or as an experiment) with or simply his attempt to throw a faster knuckleball.  Regardless, the sink (or rather, lack of vertical spin deflection) on the pitch could make it an effective weapon, if he can control it properly.

Getting back to the knuckleball, our subject of interest, you should note that Haeger's knuckleball has more spread this year than R.A. Dickey's knuckleball but less than Tim Wakefield.  And similarly, his knuckleball is faster (69.5-72.8 MPH) than Wakefield's (65MPH) knuckleball, but slower than either of R.A. Dickey's two knuckleballs.  Remember, we have found three factors in knuckleball effectiveness:  1. the pitch's speed, the command of the strike zone with the pitch, and the amount of movement on the pitch (as long as the increase in movement is not accompanied with too large a loss of control, it will improve the pitch).  Factor 1 clearly would give him an edge over Wakefield but put him behind Dickey.  Factor 3 would seem to give him an edge over Dickey but behind Wakefield.  What about factor 2, his control over the pitch?

Well...as you could probably guess, that's not so good: 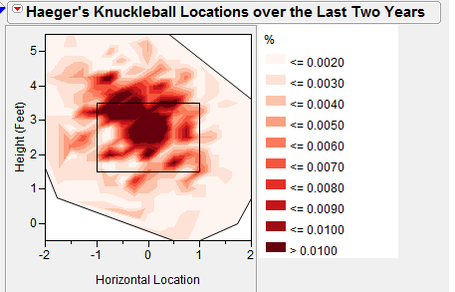 Figure 2:  Heat Map showing the most frequent locations for Haeger 's knuckleball over the last two seasons.  The darker the red, the more frequently does Haeger's knuckler hit that location as the pitch crosses the plate.  The Black Rectangle in the center is an approximation of the strike zone.

For sample size reasons, I combined the 2009 and 2010 results to create this strike zone plot for Haeger (I also used larger bins).  The result should still be clear:  Haeger's control over his knuckleball clearly is his biggest problem.  Despite having less movement on the pitch than Wakefield, the spread of his knuckleball locations is even more all over the place. You'll note the scale on this graph is different from the ones in the previous articles because i had to show some higher frequency locations at heights of 0 or lower.  These are pitches that hit the dirt.  Moreover, his knuckleballs seem to miss high all too frequently.  If he could shift his aim on average a little down and toward left handed batters, he should have better accuracy.  But even then his overall spread seems larger than our other two knuckleballers, which would still be a problem.

NOTE: Table Cells marked by *s are marked that way to alert you to the small sample sizes in those instances.  So those results are probably extreme, but pay them little mind.

As you can see from the results here more clearly, Haeger's accuracy with the knuckleball is much worse than Dickey and Wakefield, hitting the wide zone only 63.89% of the time this year.  And even that number is misleading because my strike zone is a rather wide one (like i said, 2 foot wide plate):  47.2% of knuckleballs thrown this year have been taken for balls.  Clearly control is a major problem for Haeger and he really doesn't deserve another shot at the majors until he can solve it.

Once we take control out of the equation, there are things to like about Haeger.  Like Dickey, Haeger gets a decent ground ball rate on his knuckleball, with the GB% being around 48% each year on the pitch.  This is slightly higher than Dickey's GB Rate on his slow knuckleball, and far above the GB Rate for Wakefield's knuckleball.  The Whiff Rate on the Pitch is even better than both Dickey and Wakefield, though part of that is undoubtedly because the pitch has been so inaccurate.  If Haeger was to improve his accuracy, whiff rate would probably go down, but so the swing rate by batters would increase as well, resulting in the pitch being very effective at getting swinging strikes

That said, there are certain things that still look like negatives.  Haeger's fastball this year looks beyond terrible.  The pitch is not terribly slow (82-84MPH), but doesn't have any particularly above-average movement to it.  The pitch this year is an extreme fly ball pitch (26.92% of the time).  And the pitch is getting simply CRUSHED:  Batters have a .462 BABIP on the pitch, and an insane .923 SLGCON.  In essence, this means every time a batter puts the fastball into play, they're averaging a little less than a single every time.  Similarly, the BABIP and SLGCON on Haeger's knuckleball are also a bit too high for our liking.

HOWEVER: Do note, once again, that this is a small sample size.  I would HEAVILY EXPECT for the BABIP and SLGCON results this year to regress naturally.  In regards to the knuckleball, with it's good GB Rate, we should expect for the SLGCON to fall closer to Dickey's SLGCON (.407).  Maybe it won't drop quite THAT low, but it should drop to at least .500 with more time.

In regards to the fastball, no pitcher has had a GB% as low as his fastball this season, or over the last three seasons.  So it's results should get better naturally as well.  In addition, remember:  for a knuckleballer the fastball serves two purposes:
1.  To throw on 3-0 counts (and slightly-less-often on 3-1 counts) for strikes.
2.  To mix it in occasionally to catch batters looking for the knuckleball and to surprise them for a few strikes here or there.

Wakefield and Dickey do this very well, resulting in their fastballs amusingly looking great on fastball's list of best fastballs.  They're able to do this a lot because they are ACCURATE ENOUGH with their knuckleball so as not to have to rely upon the fastball very often in hitter's counts.  Haeger has not been accurate enough to do this, and so he's had to throw the fastball on too many hitter's counts.  As his knuckleball accuracy improves, so should his fastball.

The Future of the Knuckleball in the Major Leagues:

As we've said before there are three factors that lead to knuckleball success in the major leagues:
1.  The Range of Movement on the Pitch (Greater Range of Movement, the better)
2.  The Velocity of the Pitch (Greater Velocity is better)
3.  Control over the Pitch.
It seems to be difficult for a knuckleball pitcher to find a good balance between the three factors; after all, a large amount of movement may simply lead to a lack of control, negating any value that increased movement might bring.  Similarly, if increasing the velocity of the pitch reduces control, it might not be worth trying.

R.A. Dickey and Tim Wakefield have currently found a decent balance of these three factors.  Moreover, Dickey's increased velocity gives him an upside that Wakefield may never have possessed.  If Dickey can keep his delivery and grip consistent, he should be a very successful pitcher for the next few years.

Charlie Haeger is the only new knuckleballer on the current horizon.  And as we've discussed above, he has not found a balance between the three factors.  Perhaps he'll do so like Dickey has, by finding a way to decrease the range of movement of the knuckleball.  Perhaps he'll try to become more like Wakefield and decrease his speed.  He might need to do neither: his strike zone heat map above indicates that he simply may be aiming too high and toward RHBs than he has to.  Regardless: if he finds a balance on the pitch, I would suspect his upside is higher than that of Wakefield (because of his increased speed) but lower than that of Dickey.  Yet he may have a long way to go before he can find that balance.  Which is why its fortunate for him that knuckleballers can pitch at older ages than other pitchers: he still has time to find his accuracy.

And if he does, he'll insure that the knuckleball tradition continues as it has for over 72 years in the major leagues.