Mastering the Knuckleball Part 2: How has R.A. Dickey Developed and Why is his Knuckleball So Much Better than Tim Wakefield's?

Share All sharing options for: Mastering the Knuckleball Part 2: How has R.A. Dickey Developed and Why is his Knuckleball So Much Better than Tim Wakefield's?

Yesterday, I took a look at Tim Wakefield and how he's able to use his knuckleball to consistently be a satisfactory #5 starter/innings-eater.  Today, I'm going to take a look at R.A. Dickey, who has taken the Knuckleball and has basically performed as the Mets' Ace since he came up to the Majors in May.  Here are his numbers this year:

Pretty good right?  His Walk rate is very good (especially for a knuckleballer) and unlike Tim Wakefield, he is able to get a lot of ground balls.  But how is he doing it?  What makes his knuckleball so much different from Wakefield's pitch?  After the Jump, we'll find out.

Dickey does a few things right off the bat that are clearly different from Wakefield.  First, he doesn't have a curveball; Dickey simply uses a knuckleball and a fastball.  Second, both of his pitches are significant faster than Wakefield's pitches (his fastball is actually not a complete joke).  Figure 3 below shows how the speed on Dickey's knuckleball has increased over the last three years. 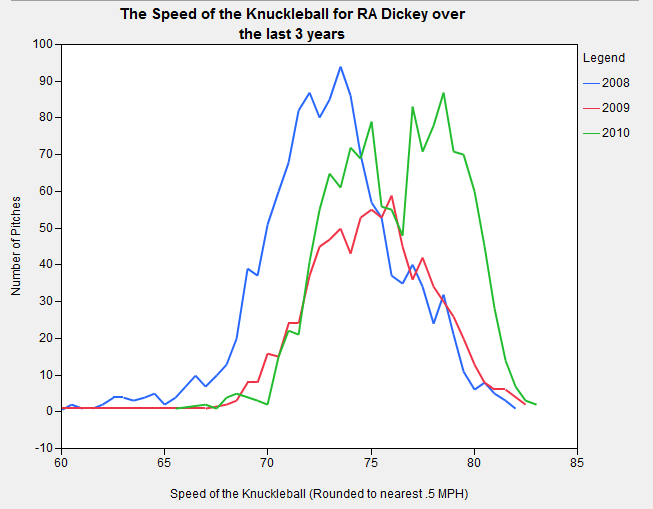 Figure 3:  The amount of Dickey's knuckleballs that have hit each velocity value (rounded to the nearest .5MPH) over the last three years.

You can see this year how Dickey's velocity chart has really blossomed into a clear binomial distribution.  This shows that it is not simply that his knuckleball has gotten faster over the last three years, but that he now can clearly throw it at two speeds.  It must be noted that Dickey uses each speed of knuckleball differently:  he throws the harder, faster, knuckleball in pitcher's counts, particularly in 0-2, 1-2, and 2-2 counts.  On 0-0 counts, as well as other hitter-favoring counts, Dickey relies upon the slower-softer knuckleball.  For more on how he uses each type of knuckleball during each count, see this article on Amazin Avenue.  The movement on Dickey's knuckleball is more or less unaffected by whether it is the fast or slow version of the pitch and the location seems unaffected as well.  That said, for reasons that will soon become apparent, to talk about Dickey's results, one must keep in mind the two different speeds he can throw.

Now let's take a look at the movement on Dickey's knuckleball each of the last three years. 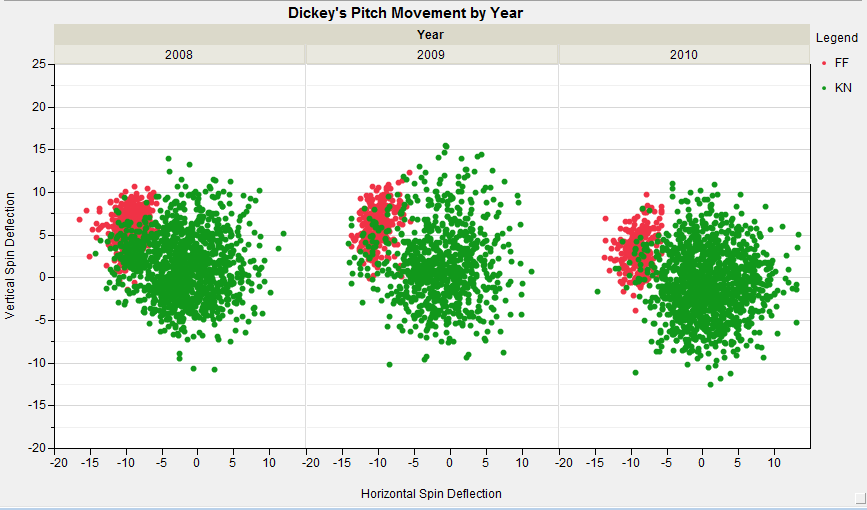 Figure 4: The Spin Deflection of R.A. Dickey's pitches over the last three years.  The Red dots represent DIckey's fastball, and the green dots represent his knuckleball.  The Graphs are from a catcher's point of view, so pitches on the left side of the graphs appear to bend toward Right-Handed Hitters, while pitches on the right side of the graphs bend toward Left-Handed hitters.

Table 3:    A breakdown of the movement of Dickey's pitches each of the last three years.

Figure 4 and Table 3 are interesting in that they show clearly a change this year.  Dickey's knuckleball has never moved as much as Wakefield's knuckleball (if you look at the graphs carefully, you can see that Dickey's pitches form a tighter cluster), but it's vertical spin deflection numbers used to be somewhat similar to Wakefield's pitch.  That's clearly not the case this year; Dickey's knuckleball has what seems to be on average 2 inches less vertical spin deflection. And it's unlikely that this change is just a random coincidence:  Wakefield's knuckleball spin-deflection plot hardly changed much from 2008-2010.  In addition, from looking at photos, Mike Fast believes that Dickey has changed slightly the finger angles on the pitch.

(Also of note is that Dickey has changed his fastball so that it ALSO gets much more drop.  This has clearly been effective, resulting in the pitch having an insane 59.7% GB Rate, which is far higher than it has had in any other year.)

So, we now know that Dickey's pitches have more "drop" on them this year than any previous year.  So that's going to affect how he's locating his pitches, right?  Well take a look at Figure 5:

Figure 5:  Heat Maps showing the most frequent locations for Dickey's knuckleball each of the last three years.  The darker the red, the more frequently does Dickey's knuckler hit that location as the pitch crosses the plate.  The Black Rectangle in the center is an approximation of the strike zone.

The Second thing you should notice is that the increased drop on Dickey's knuckleball hasn't seemed to affect the locations of his pitches at all!  So What's going on here?  Well, Dickey has changed not only the movement on the knuckleball this year, but his aim with the pitch as well (as measured by the pitch's initial velocity vectors).  So the additional sink has not resulted his pitches seeming-more likely to hit the lower part of the strike zone.  However, what has changed this year is that Dickey's pitches have hit the strike zone far more often than previously. This can be seen (though it's hard) by the fact that there are less dark red spots out of the zone this year compared to the last two years.   But is his increased accuracy simply the result of Dickey is "aiming" better this year?

The answer is no.  Take a look at the pitch movement plots in Figure 4 again.  You might have noticed that Dickey's pitches cluster more tightly than Tim Wakefield's pitches do in all three years, showing that he gets a lower range of movement on the pitch.  But what is harder to notice is that Dickey is getting LESS movement on the knuckleball this year than EVER BEFORE.  Yes, Dickey's greatest season has come in the season he's had the least amount of movement on the pitch!  In 2009, Dickey's knuckleball moved over 10 inches 12.6% of the time.  This year, it's moved over 10 inches only 3.7% of the time (by comparison Tim Wakefield in 2009 and 2010 has had 16.7% of his pitches with over 10 inches of movement).  While this should theoretically make his pitches more "hittable", it also has led to Dickey being able to increase his accuracy, which has helped his entire statistical portfolio.

Table 5 ought to make this clear:

Table 4:  The Effectiveness of Dickey's Knuckleball each of the last 3 years.  Explanations of each of the columns are as follows:
Run Value Per 100 Pitches:  The Run Value per 100 Knuckleballs thrown.  NEGATIVE Run Values are good while Positive Run Values are bad (The opposite of fangraphs).
Expected Run Value per 100 Pitches: The Run Value per 100 Knuckleballs thrown that we would expect based upon the batted ball types of balls put in play against Dickey.
Whiff Rate:  (# of Swinging Strikes)/(# of Pitches Swung at by Batters)
Swing Rate:  (# of Pitches Swung at by Batters)/(Total Pitches Thrown)
Swinging Strike %:  (# of Swinging Strikes)/(Total Pitches Thrown)
GB Rate:  % of balls hit into play by batters that result in ground balls.
In Play Rate:  % of total pitches (of that type and year) that are put into play.
% of Pitches in the Zone:  % of Pitches in a wide (2 feet wide) strike zone.

Looking at the table above, several things should pop out.  First, Dickey's ability to hit the zone with either speed has increased dramatically this year.  His 67.66% Zone % with the fast knuckleball rates up there with Wakefield's level of control, while his 73.20% Zone % is extremely impressive for a knuckleballer.  This is the reason why Dickey's BB/9 is so low (2.21) as compared to his results the last two years.

Second, it should be fairly obvious that, aside from the Strike Zone%, the harder knuckleball, has always been a more effective pitch.  The pitch gets more whiffs than the slower knuckleball, which is why he's able to strikeout a decent number of batters.  (Note:  The Swing Rate for the harder-knuckleball is higher mainly because he throws the pitch in counts where batters are far more likely to swing).  And the pitch, in every year, seems to get a very impressive amount of ground balls.

Speaking of Ground Balls, I should mention that Dickey's total GB% was 46.5% in 2008, 47% in 2009, and (as mentioned before) 54.1% in 2010.  So what's responsible for this jump in his GB rate?  You might think the cause is that his pitches are dropping more than they did previously, and that IS true in regards to the fastball (which gets a ground ball on 60% of balls put into play).  But look at the knuckleball ground ball rates in the table from year to year...they don't change much at all! (In fact the GB% is actually down this year for the fast knuckleball)  In other words, while his knuckleballs have more sink than ever before, that is NOT the reason why he's getting more ground balls this year.

In Conclusion, this seems to be the big difference between Dickey and Wakefield.  Both Pitchers are able now to locate their pitches satisfactorily in the strike zone.  Dickey does use the whole strike zone for his pitches, while Wakefield does not (he barely uses the portion of the strike zone closer to left-handed batters) and Wakefield does get more movement on the pitch than Dickey.  But the biggest difference is simple: SPEED.  Dickey's knuckleball doesn't move as much as Wakefield's does; in fact it seems like it's moving even less this year by a good amount.  Still, Dickey is able to rely upon his much higher velocity (along with his now improved accuracy) to more than compensate for the lack of movement on his knuckleball.  By using a faster knuckleball, Dickey is able to get a greater amount of swinging strikes and a really high ground-ball rate, while Wakefield's slow knuckleball is an extreme fly ball pitch with a lower swinging strike rate.  Now I'm not saying that a slow knuckleballer is at best a 5th starter; having greater movement on the pitch and greater control of the strike zone can improve a knuckleballers performance.  But Wakefield's upside at the moment would seem to be being a #5 starter who can eat plenty of innings, while speed allows for Dickey to truly be a very valuable pitcher at least in the middle of a rotation.

Later today in Part 3, I'm going to talk about the future of knuckleball use in the major leagues.  So I will be talking about Dickey a little more as well as a guy named Charlie Haeger.