Building A Better Bullpen On The Cheap

Share All sharing options for: Building A Better Bullpen On The Cheap

I was thinking this weekend about the Orioles' signing of Mike Gonzalez to a two year $12 M contract (plus incentives!) to be their closer, and the waste of putting real money into the bullpen in that fashion - especially for a team with other holes to fill and no realistic chance at contention. It seems like it's been a maxim in the stat community that throwing lots of cash at pitchers who only pitch 60-70 innings a year (often not even in high leverage situations) isn't a good idea. The San Diego Padres have been known for their ability to build quality bullpens on the cheap in recent years, and that crew's success - ML leading 2.75 ERA, 9.8 K/9, 2.6 BB/9, 2.87 FIP, 3.01 xFIP, 56.5 RAR, and 7.87 WPA (stats not including the weekend's games) - has been part of the reason why the team is leading the NL West. All that, and the Pad's are paying their relievers only about $8 M this year - an outstanding return on investment. Perhaps San Diego has just gotten lucky and they're benefiting from playing half their games in the most pitcher-friendly park in the majors (both true, to a degree). Here's a plot of each team's bullpen xFIP by the salaries of all their relievers with at least 10 IP: 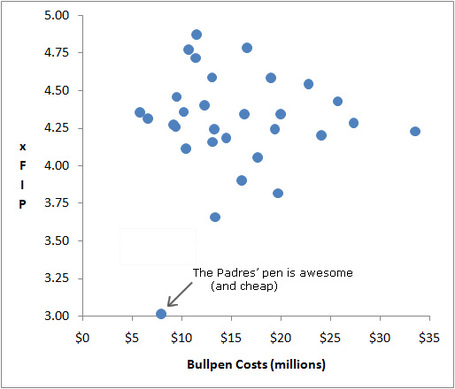 As you can see, there's virtually no correlation between spending money and getting results. A couple of the team's are skewed a bit, since the Cubs (Carlos Zambrano) and Brewers (Jeff Suppan) had supposed starters pitching in relief. Taking those two salaries out just clumps the data points even closer together though.

If one were to look at runs above replacement - so that work-load matters - we get a similarly scattered picture: 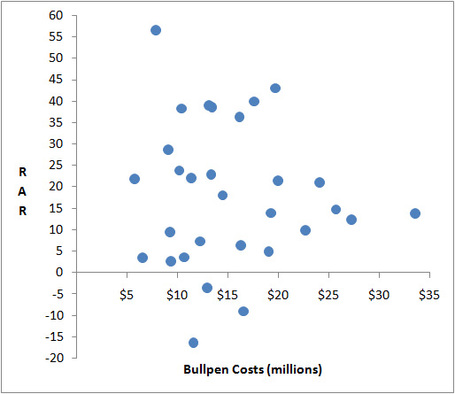 Moral of the story? Giving over $41 M to the likes of Danys Baez, Jamie Walker, and Chad Bradford - as the Orioles did after the 2006 season, to terrible results - isn't a particularly effective strategy.

* Even excluding Suppan and Big Z, the average pen came out to about $14.5 M. That seems a little high considering that the average team gets only about 3 fWAR out of their relievers each year, but I wasn't planning on getting into a whole big thing about reliever valuation.

* The Marlins have the most inexpensive highest paid reliever, with Leo Nunez making only $2 M. He's joined by a bunch of guys making near the minimum, giving Florida the cheapest pen at about $5.8 M. (Not exactly surprising.) The result has been a little below average performance (4.35 xFIP) though nothing too terrible.

* Mariano Rivera is surely awesome, but he's costing the Yankees $15 M - or more than 18 teams are paying for the entire bullpens.

* Even though the majority of the 31 highest paid relievers are closers, a full 13 of them have fewer than 5 saves on the season. The totals saves by the group make up less than half of the saves in the majors (about 47%). If paying a lot of money for a closer is a bad idea, paying a lot of money for a middle reliever seems like a really bad idea.