This post was inspired by Jonah Keri's comment on Twitter during their game last Thursday that "Only the Royals can turn 24,000 baserunners into 4 runs" (they had 4 runs on 19 hits and walks), to which I responded "I beg to differ. O's seem pretty adept at that as well." That was based only on watching most Orioles' games, writing up a game wrap on the majority of those, and too often having to mention that the O's scored only X runs on Y baserunners (with X << Y). Figured it was worth actually looking at instead of just going with my gut, so here's a graphic by team of baserunners (in this case non-home run hits plus walks plus HBP) per run scored. Also added in each team's ISO, since power production is one way of getting more for less. 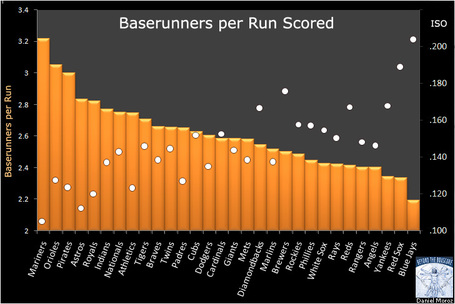