Hype Fails to Live up to Stephen Strasburg

Share All sharing options for: Hype Fails to Live up to Stephen Strasburg

Last night, I had the privilege of attending what was, without a doubt, the most important game in the young history of the Washington Nationals' franchise. Before I get into the greatness that was Stephen Strasburg's major league (or perhaps more like AAAA) debut, let me paint a picture for those who were unable to witness history in person.

This is exactly what the national pastime is supposed to feel like in the nation's capital.

No doubt you've already read/heard about the former San Diego State star's performance, but let's put his performance into perspective (the following according to Baseball-Reference.com's Game Index):

Of course, if you're reading this blog, you're probably interested in detail that you can't see in a box score, or even necessarily a record book. As always, we can satisfy our curiosity by digging deeper, using Pitch FX data to get a better idea of what Strasburg's performance "looked" like. Oh sure, I can tell you that it was a sight to behold, or I can show you exactly how #37 took 15 mph off his fastball to make a hitter look silly (data from Brooks Baseball's Pitch FX Tool). 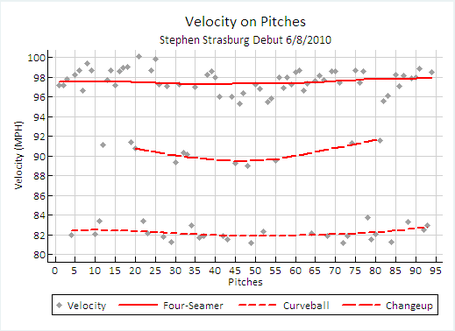 The chart above plots Strasburg's pitch velocity as he progressed through the evening (Lowess curve superimposed upon the data points), separating pitches by pitch type as identified by MLB's algorithm.* As you can see, the phenom consistently kept his four-seamer's velocity around 98 mph, topping out at 100.1. He frequently complemented his near-triple-digit heater with an 82-83 mph curve that carried enormous break. On top of that, he occasionally proffered a changeup that left his hand at speeds higher than many pitchers' four-seamers.

*Note: Several commenters and analysts (such as Tim Kurkjian) have noted that Strasburg throws both a four-seamer and a two-seamer (or what Strasburg calls a 'one-seamer'). This makes sense considering the break on his fastballs. However, MLBAM doesn't yet have enough data (I assume) to separately classify these two pitches, so they both came through as four-seamers. I'm going to rely on MLBAM's estimation for now, since that's where the data came from, but feel free to read everything that is labeled "four-seamer" as just plain "fastball."

But for all the break on his curveball, Strasburg's four-seamer maintains a phenomenal amount of movement as well. See the chart and table below:

As you can see, Strasburg's fastball has almost as much negative break as his curveball has positive break, and it darts as much to the first base side as the curveball does to the third. Over the course of the evening, the rookie relied heavily on the four-seamer to start off an at bat, and then began to mix in the curve to keep hitters off balance. Strasburg's pitch selection vs. the count:

Both pitches were effective last night, with high strike and whiff rates. Of course, this might have something to do with the Bucs' lackluster offense. The chart below shows that the Pirates hitters were swinging at just about everything. Hard to say so far if this is because Strasburg is so good or because the 2010 Pirates aren't exactly slamming the ball around. As usual, it's probably a bit of both. 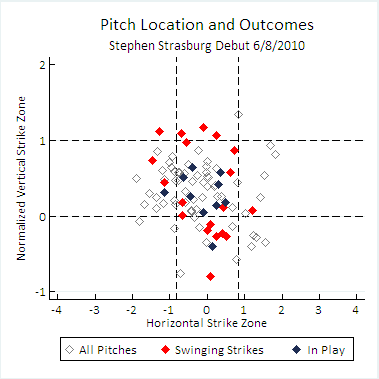 Lackluster opposition aside, Strasburg demonstrated a significant amount of control for an inexperienced pitcher. The location chart below indicates where the Nats' rookie hurler was locating his pitches. The chart on the left represents only fastballs, while the chart on the right represents his curveball and changeup. As you can see, he managed to keep the fastball low and near the corner, while he rarely left a breaking ball up in the zone: 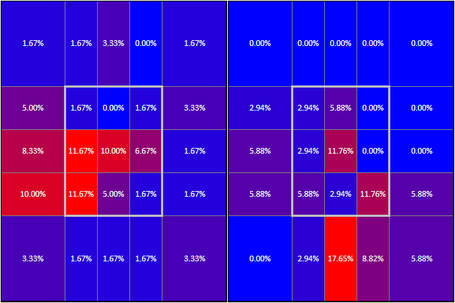 There's also a notable difference between how Strasburg approached lefties and righties. When it came to left-handed hitting, Strasburg kept the ball on the outside corner or outside altogether. Against righties, he simply pounded the strike zone with fiendish accuracy. Note the distribution of pitches below (left-handed batters on the left): 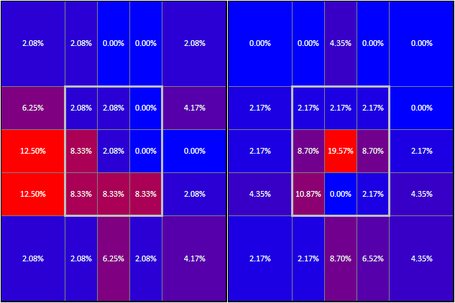 This strategy worked particularly well against right-handed hitting, as Strasburg relied heavily on his curve breaking over the plate. The lefties had similar trouble against the fastball on the outside corner.

Finally, let's exit the realm of generalizability for a moment, and look at one particular pitch. It was Stephen Strasburg's 21st pitch of his career. In the grand scheme of things, it didn't mean much. It was a ball that missed rather badly inside and did not draw a swing. But it was a fastball, and it broke over 8" upward and nearly 8.5" towards the plate...

That 21st pitch of his evening and career was a snapshot of everything that this kid is capable of: overwhelming speed with mind-blowing movement. It will be interesting to see how Strasburg fares against a more patient team. He might force more deliberate batters to swing in pitchers' counts by employing the break of his heater and his curve. But the young man also showed a tendency to go to his breaking stuff a bit too often against weak bats such as Delwyn Young's and Jeff Karstens'.

If Pudge Rodriguez can keep him from turning to the off-speed stuff too often, and if the newest star in the District sky can manage to maintain his break and velocity, then Stephen Strasburg will only manage to pull the Nationals into the ranks of the respectability, likely making history along the way.