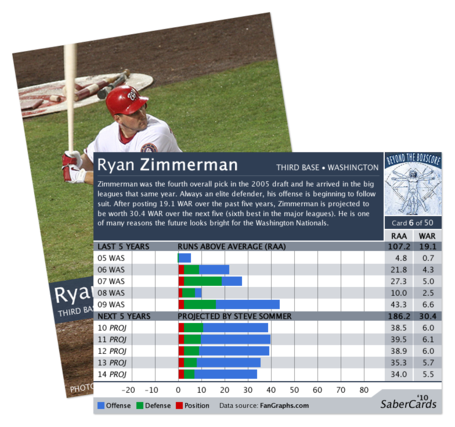 And for those of you expecting the concluding ten-player post on our projected 10 Best Players of the Next 5 Years, I present to you a five-player post on the first half of that list. We've opted to split up the final ten players into two posts, because there's so much awesomeness on this list that my very hands tremble at the thought of writing an entire post attempting to explain their brilliance.

Okay, so maybe that's a bit much, but seriously, these next ten guys are truly the stars of today [and tomorrow!], often transcending words (even long ones) and surpassing even our largest expectations...     just ask Mr. Heyward. We will only be covering the first half of the concluding ten players on our list today, but if I may say so, that could be seen as a good thing, because now we have something to look forward to tomorrow.

And for all of you cool cats who missed all the fun last week or just want a reminder of who else made the list and how we went about projecting this stuff, here's the first portion of the rankings (No. 41-50), along with the second (No. 31-40), third (No. 21-30) and fourth (No. 11-20) pieces. And as a healthy reminder, this list reflects only the value of on-field performance, completely ignoring salary and contract status. A win is a win, whether it put the team back $2 million or $12 million. For Steve's projection method, click here.

Additionally, we've got a pretty new SaberCard for you guys today to present along with our next five players. Thanks to Adam Darowski for creating such a cool, informative graphic. You can click on the image itself for a larger, clearer view.

And with all of that jazz out of the way, let's take another chunk out of the 50 Best Players of the Next 5 Years.

Let's just say that we expect Bruce to improve upon his present MLB track record. Currently the holder of a .248/.322/.463 line (.337 wOBA) in 1073 plate appearances with the Reds, the right fielder has produced only 3.7 WAR in the three years since being labeled the game's best prospect by Baseball America.

A prodigious hitter with huge power, a developed approach and a track record of success, Bruce was drafted by the Reds out of high school in 2005, the same year as Andrew McCutchen, and immediately established himself as an elite prospect. After killing the minors (his lowest wOBA at any stint was .393 at Hi Single-A in his debut season), Bruce came up to Cincinnati in 2008, but struggled due to a lack of contact and a propensity to swing-and-miss.

Bruce came back in 2009 and showed significant improvement in his approach as a hitter, but a .221 BABIP significantly suppressed his numbers, leaving him with a slightly below average .329 wOBA in 101 games. But few doubted Bruce's ability even after two underwhelming seasons, and he's showing signs of breaking out in 2010, with a .368 wOBA this season and a 1.3 WAR that already nearly matches his career-high from last season.

But our projections see a major breakout in Bruce's near future, as we have the 23-year-old at 5.2 WAR in Year 1 of our projections. Considered a slightly above average defender, we project his bat to take a big step forward, with a +34 RAA in Year 1 compared to his +0.1 mark in 2009 with the Reds. And given his youth, we project continued improvement from his bat through all five seasons, even though his glove's progressive decline prevents his value from taking truly massive steps in the right direction.

One of the oldest players on the list, his presence this high should really show how great this guy is. Most guys on this list are already in or are entering their age-based primes, while Utley is clearly leaving his as he turns 32 this winter. But even Utley's projected decline phase puts him among the best players in the game, because his present peak as a consistent 7-8 WAR player puts him pretty much head and shoulders above everyone.

Honestly, I don't really know what kind of background to put for a guy that already gets talked up so much as a great player in these realms but doesn't really retain that reputation beyond that. In the past five years his WAR has never dipped below 6.6, his UZR never below 7.6 and his RAA never below +34.3, and while his offensive numbers are down some this season, one can point to his BABIP to explain away some of that.

Our projections see Utley's decline beginning immediately in Year 1 and continuing through all five years, with a drop from the 7.6 WAR he put up last season to a 6.6 WAR in the initial year. His Year 1 RAA of +30.7 is an immediately decline from his previous marks, while his +9.8 UZR mark in Year 1 is also a decline after three straight years with double-digit positive UZRs. The decline comes hard for Utley, with his RAA dropping 2 to 5 runs in each respective season, until he settles in with a +14.8 RAA in Year 5 as a 36-year-old.

But even at Age 36, he still projects as a plus defender at second (+5.9 UZR), which combined with an above average bat still makes him one of the better players in the game even if he's no longer in the top 3 or 4. Of the position players that make the Top 50, only Alex Rodriguez shows a bigger decline in WAR between Year 1 and Year 5.

What? You guys didn't think that we'd exclude The Heymaker, right?

Already among the best players in the game despite being only 20 years old with 50 games of experience above Single-A coming into the season, Heyward's presence on this list shouldn't surprise anyone that doesn't live in a cave from December through mid-June. Heyward's currently 8th among NL outfielders in WAR, but he's fifth in the NL in wOBA and OPS thanks to impressive showings of power and patience.

Our projections see Heyward starting off quite nicely in Year 1 with a 4.1 WAR that would be fantastic for a player Age 20/21, but it's really in Year 2 that Heyward's star finally begins to take off. After a year of making adjustments as a hitter, Heyward sees his RAA jump by OVER 12 RUNS, from +19 in Year 1 to over +31 in Year 2. I haven't done this with any other player on the list, and all of this data will come out later this week after we finish up the list, but I just have to include Heyward's progressive RAA here just to put it into perspective for you guys.

Yeah...    so we think that Heyward's bat projects to get a little bit better over the next five seasons. With a glove that projects as above average in every season, ranging from +2.8 in Year 5 to +6.8 in Year 1, it shouldn't be surprising that Heyward projects to offer so much value to the Braves. No player on the list shows even close to the kind of improvement that Heyward does over the course of the projections.

He's one of just 3 players to put up an RAA over 50 in any single season, and one of just 4 players to project for a single-season WAR of 6.8 or better. I think that it's time for Frank Wren and company to begin working on that contract extension.

Common thought probably doesn't put Tulowitzki among the 10 or 15 best players in the game, but it probably should. After enamoring the baseball world with a huge 5.4 WAR rookie season in 2007 and thoroughly disappointing those same people with a 0.9 WAR sophomore season the following year, Tulo jumped back on the horse in 2009 with a relatively quiet 5.7 WAR performance that vaulted his name back into the discussion for best players in the National League.

Tulowitzki is a rare bird, as a shortstop that can offer top value both at the plate and in field. With plus power, a patient approach, and solid hitting ability, Tulowitzki is capable of being an elite hitter, as his +33.4 RAA showing in 2009 reflects. Factor in that he's a plus defender at shortstop (+14 UZR, +46 DRS marks for career), and his impressive placing on this list really shouldn't be all that surprising.

We don't predict Tulowitzki to quite repeat his 2009 offensive showing, but he does show some impressive consistency with RAA marks that never dip below +27.0 or reach higher than +30.5. We don't project Tulowitki's glove as plus, though, but rather we have it as average. Sorry, we're just not really buying into the DRS data. Even so, a league average defensive shortstop with one of the best bats in the game is still a monster asset, and Tulowitzki is a good reflection of that here.

Yeah, we hear a lot about how the Nationals have Stephen Strasburg coming to Washington and Bryce Harper coming to the organization in general, but people seem to quickly forget that the Nationals already have one of the best players in the game locked up long-term as well. Zimmerman was drafted as the fourth overall pick in 2005 and immediately established himself as Washington's everyday third baseman the following year, putting up an awesome 4.3 WAR in 157 games as a rookie. Always known as a wizard with the leather, Zimmerman immediately became one of the best defensive third basemen in baseball.

But Zimmerman left a lot of people concerned by the end of the 2008 season, as his offensive performance had taken steps backwards in consecutive seasons. After putting up a .348 wOBA in 2006 as a rookie, that mark dipped down to .340 in 2007 and then dipped again to .336 in 2008, leaving some to wonder whether Zimmerman would be limited to being merely a great-fielding-okay-hitting third baseman rather than an all-around star. The Nationals clearly weren't buying though, as they signed Zimmerman to a five-year, $45M deal before the 2009 season.

Looking back now, that deal looks like a swift move of genius, as Zimmerman took huge steps forward with the bat last season, putting up a .377 wOBA. Combined with his glove, he put up a 6.6 WAR that was the best among NL third baseman. And the crazy thing? He's getting better. In 2010 he's hitting for even more power while having his walk rate increase by four percent AGAIN (6.7% in '08, 10.4% in '09, 14.6% in '10). He currently leads all NL position players in WAR by a sizable margin, and appears to be establishing himself as a superstar going forward.

Honestly, I think that Zimmerman's projection is one that he could actually exceed quite easily. He projects to have a remarkably consistent bat, with RAA marks between +27 and +30 in every season, along with a glove that's above average in every season as well. But Zimmerman's shown flashes of a bat that could be +40 or better within a season, as well as a glove that's already produced two seasons with UZR marks over +13.

Ryan Zimmerman is already one of the best players in the game, and I think that a lot of people know that. But I don't think that many people realize just how good Zimmerman is. Between him, Strasburg, Harper, Norris, Zimmermann and their other pieces, things are looking really bright in D.C. in my opinion.