Share All sharing options for: Alan Trammell and Lou Whitaker were worth (a bit) more than Ozzie Smith

In 2002, Ozzie Smith hit the Hall of Fame ballot for the first time. Other notable newcomers included Andre Dawson and Alan Trammell. Smith cruised to victory, garnering 91.7% of the vote. Dawson tallied 45.3% while Trammell received a mere 15.7% of the vote. At least Trammell would remain on the ballot. Three of his Tigers teammates hit the ballot the year before, in 2001. All vanished after failing to receive 5% of the vote. Lance Parrish received just nine votes (1.9%), Kirk Gibson picked up 13 (2.5%), and Lou Whitaker led the trio with 15 votes (2.9%).

I'm a fan of Ozzie Smith. I'm certainly glad he was inducted into the Hall of Fame. The voters showed a rare appreciation of defensive dominance. But there's just one thing—Alan Trammell and Lou Whitaker were worth more than Ozzie Smith. 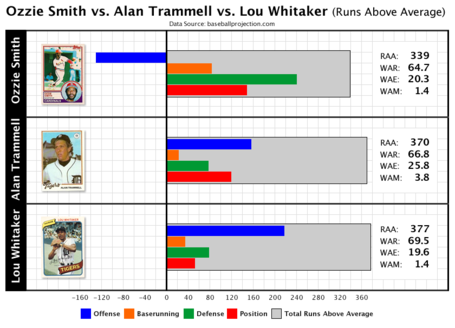 Click to enlarge. Explanations after the jump. Numbers from Rally.

All three could run well. Smith was worth an impressive 82 runs (580 steals to just 148 caught) while Whitaker was worth 33 and Trammell 21. Whitaker was last of the three in steals, but Rally's baserunning metric is about more than steals:

Whitaker was great at all the little things that (previously) could not be quantified.

Okay, tough to compete with Ozzie. Rally's metrics confirm what our eyes told us. Ozzie was one of the elite greats along with Mark Belanger and Brooks Robinson. If you're curious, Smith won 13 Gold Gloves (+239 runs), Trammell won 4 (+76 runs), and Whitaker won 3 (+77 runs).\

Smith picked up the most value, playing the most innings at short. Whitaker, as a second baseman, had a pretty big disadvantage here.

With the exception of Bill Dahlen, Whitaker is the all time leader in WAR among eligible non-Hall of Famers (69.5). Trammell (66.8) is close behind him (with Derek Jeter, Barry Larkin, Bobby Grich, Edgar Martinez, Larry Walker, and Jim Thome between them). Smith (64.7) is about the same distance behind Trammell. They're all very close to each other, but the fact that one was easily elected, one was shrugged off, and one is still waiting is kind of crazy.

Maybe Ozzie had the better peak? Is that why? WAE takes all WAR totals above 3.0. Smith actually did edge Whitaker slightly, 20.3 to 19.6. But look at Trammell! He comes in at 25.6. He had some great seasons.

Finally, WAM takes all WAR above 6.0. Smith and Whitaker are tied here at 1.4 and again Trammell comes out on top with 3.8.

Again, this is not to say Ozzie Smith doesn't deserve all the fame he's received. This is merely to say that Alan Trammell and Lou Whitaker should have been celebrated in the same way. If find it incredible that possibly the two most underrated players of the 20th century happened to play side-by-side for 19 seasons.