Dwight Evans was worth more than Jim Rice

Share All sharing options for: Dwight Evans was worth more than Jim Rice

Last week I hoped to drum up a little controversy with my bold claim (and accompanying graph) that Greg Gagne was worth more than Joe Carter. It turns out that either you guys already knew that, you really didn't care, or you were so in awe of the beautiful graph that you couldn't bring yourself to respond. I'll assume that it's either the first one or the last one.

Today I return with a different comparison—one that doesn't seem so random. These guys were teammates in the same outfield. One's in the Hall of Fame. One was cast off after one ballot. I'd venture to say that they deserved opposite fates, though I'm really not sure either one deserves to be a Hall of Famer.

Of course, I'm talking about Jim Rice and Dwight Evans. 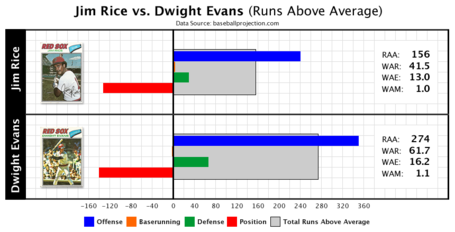 Click to enlarge. Explanations after the jump. Numbers from Rally.

OPS+ doesn't even capture Rice's biggest flaw as a hitter. I've always wondered why people don't pay attention to this stat more, either. It's easy to grasp and is far from "new age". It's the GIDP. Rice grounded into 315 double plays, which is "good" for 6th all time. What does that mean? The run value of those GIDPs is -46 runs. Rice's batting runs were +279. Basically, Jim Rice gave back one sixth of his offensive production by grounding into double plays. Evans grounded into a decent amount of double plays, too. But he ranks 47th all time and was worth -7 runs in that category.

Jim Ed actually fares slightly better here. Rice was worth +2 runs while Evans was -1. Both were essentially average.

Much to my surprise, Rice rated well defensively. Rice's range was worth +9 runs and his arm was worth +13. Evans' range graded at +13, slightly better than Rice. But oh my, the arm. That's where he earned his eight Gold Gloves. His cannon was worth +53 runs. That puts him at #9 all time, though #3 and #9 are only separated by a half-dozen runs.

Both played pretty low-value positions, with Rice mostly in left and Evans mostly in right. Rice also spent quite a bit of time at DH.

Add it all up and Evans is worth 274 runs above average to Rice's 156. Not only is Evans worth more, he's worth a hell of a lot more.

A wide gap in RAA plus the playing time difference makes for a 20.2 win difference in WAR. Dwight Evans was worth one and a half Jim Rices.

As defined by Rally, WAE tallies all WAR over 3.0. The point is to find those dominant peak years. My original hypothesis was that Evans was a "compiler" and that Rice would beat him in Wins Above Excellence and Wins Above MVP. I was wrong. It's close, but Evans still edges Rice in WAE 3.2 wins.

We previously talked about WAM on BtB as any WAR above 6.0. This one is really tight as neither player exceeded MVP level often. But Evans still gets the edge, ever so slightly (1.1 to 1.0).

Personally, this is one of my favorite comparisons to use to explain WAR. I particularly love that it throws hardcore Red Sox fans for a loop to hear this for the first time. But we're stat geeks. We knew this already.

The RallyMonkey himself recommended including Fred Lynn in this graph because Rice was actually the third best member of his outfield at that point. Here is the new graph, and Rally's right. 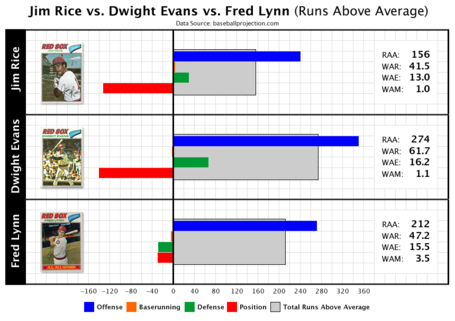 Not only does Lynn nearly reach Evans in Wins Above Excellence, he actually beats both in Wins Above MVP. Of course, his MVP year contributes to that. But the 7.1 WAR he posted in 1975 was bested by Lynn's own 1979 season (8.4 WAR).

While Rice has a 128 OPS+ and Evans is at 127, Lynn is actually at 129 thanks to excellent OBP (.360) and slugging (.484) figures. He was a similar hitter to Evans, but had Rice's injury problems. Lynn's injury problems were more of an issue throughout his career rather than being the reason he retired (he played through age 38).