Greg Gagne was worth more than Joe Carter

Share All sharing options for: Greg Gagne was worth more than Joe Carter

When I was a kid, (like most readers of this site, I'm sure) I collected baseball cards. I didn't have a big baseball card budget, so I had to get creative with how I built my collection. I picked players who weren't superstars, latched onto them, and collected them feverishly. This is how I ended up with enormous amounts of cards of guys like Ozzie Guillen, Benito Santiago, and Pete Incaviglia. After all, I could get 40 Ozzie Guillen cards with the cash or trade bait those other kids used on their one Jose Canseco card.

Two of those players I collected were Greg Gagne and Joe Carter. I collected both for different reasons. Gagne lived in our hometown of Rehoboth, MA, so he was a natural target. He didn't have a high average or lots of home runs on the back of his card, so I assumed he wasn't all that good. I liked him because he was local. Joe Carter, on the other hand, was my exception. Other than Nolan Ryan, Carter was the one "superstar" I collected. I mean, he had to be a superstar, right? Look at all those RBI! I was in awe of his ability to drive in runs on a consistent basis.

Years ago, as I started to dig deeper into sabermetrics, I vividly remember thinking, "Wait—Joe Carter isn't anywhere near a Hall of Famer, is he?" I was shocked, I wondered how it could be. So imagine my surprise when digging into Rally's WAR database a few months ago and seeing that not only was Carter simply worth 16.4 WAR—he was actually worth considerably less than Greg Gagne (23.9 WAR). How could that be? It's become an example I use to explain WAR to the uninitiated. Today I'll use it for a Graph of the Day. 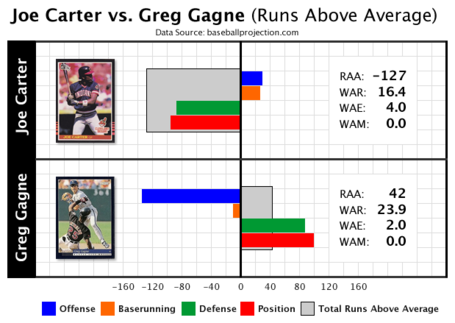 Baserunning: Carter's 231 steals (vs. 66 caught) helped him to 25 baserunning runs. Gagne stole 108 bases, but wasn't nearly as successful (caught 96 times). He was worth -9 runs on the bases. Who would have thought Carter's best tool was his speed.

As those are the baseball card stats, it's easy to see why I thought Carter was a monster. Even though his batting runs are severely suppressed by his dreadful OBP, he's still worth 53 runs at this point compared to Gagne's -142. Let's keep going:

Defense (includes Range, Infield DP, Outfield arm, and catcher runs): Here's where Gagne goes nuts. Gagne is tied for 10th all time (with Alan Trammell) in Total Zone runs at shortstop. Yes, I lived in the same town as a guy who was in the top ten all time in something. Gagne was worth 86 runs on defense to Carter's -86 runs. That's a 172 run swing. That's huge.

Position: Gagne also played the most demanding infield position while Carter was a corner outfielder. Gagne's position boosts him 98 runs while Carter's deducts him 94 runs. Again, a huge swing.

I didn't see either of these players during their careers, since they weren't local. I merely read the backs of cards and articles in Baseball Digest. Can you think of any other player combination that would surprise you in a similar way? Who did you assume was a superstar (but didn't grade out that way, objectively) and who did you undervalue (who had hidden value in their defense, position, or baserunning)?