Now that the 2010 MLB Draft has come and gone and every fan has read up on their team's some 40 to 50 draft picks, with dreams of sugar plums dancing in their heads, perhaps it's time to provide a quick reminder of what a truly inexact science the MLB Draft is and, more importantly, how long the development of most of these players takes in terms of legitimately contributing at the MLB level.  Obviously, this is not breaking any new ground despite the immediate MLB impact being felt in the nation's capital and in Cincinnati, where 2009 draftees are making significant contributions.

That being said, the success of Strasburg, Leake, and Storen ultimately represent exceptions to the rule that the seeds sown in a particular draft take between four and eight years to truly bear fruit at the MLB level.  If it does take that long for a particular draft to truly be evaluated, what can we glean from the draft that would be on the short end of that four to eight year timeframe - the 2006 Draft?

While most people would look at how many 1st Round Picks have ascended to the Majors and see how those 30 players are performing, a better gauge, in terms of standing at the time of the draft, might be to look at the top 30 signing bonuses from the 2006 Draft to see how those players have adapted to life as a professional player.

Thus, here are the top 30 signing bonuses from the 2006 Draft, with the bonus, the placement of the pick, and the players career WAR to date (assuming they've ascended to MLB) listed:

Back to the performance of those players since they were selected, here's a chart that shows the players from the 2006 Draft, in descending order of Career WAR, with their draft position and signing bonus (if applicable) indicated: 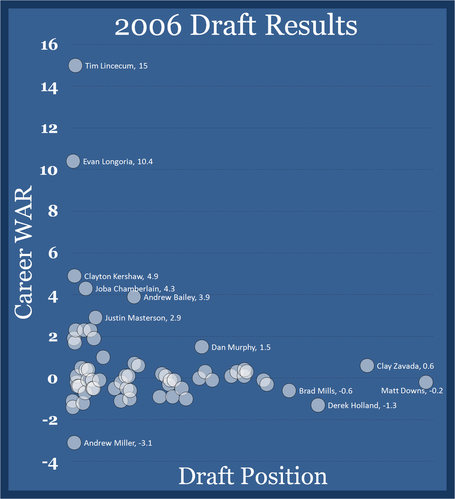 What we're seeing here is the fact that 4 years after the 2006 Draft, 66 players have made it to MLB and of those 66, only 34 have achieved a positive career WAR.  Certainly interesting to note is the fact that some of the lowest Career WAR's to date belong to the some of the very players (notably Miller, Hochevar and Reynolds)  who received the largest signing bonuses.  Of course, the fact that all have ascended to accumulate their Career WAR could be taken as a victory in and of itself.

The caveat that most young players struggle in their first extended stint in MLB obviously applies, but to see that 4 years after these players were drafted (with the signing bonuses meted out to them considered) is astounding.  Four years later, how many elite players are there - 2 in Lincecum and Longoria with a gaggle of young, if still inconsistent pitchers (Kershaw, Justin Chamberlain, Bailey, Masterson, Anderson, Scherzer, etc.) still looking to establish themselves in MLB?

While this may be an unfair characterization, to judge young players on the merits of their first couple of months or years in MLB (Ian Kennedy's Career WAR of -0.4 is a good example of this), it serves as a startling reminder for every draft season.  Every year, players are selected, picked apart and praised, then are exposed to the ultimate journey to MLB, where attrition is inevitable and where the wheat separates from the chaff to varying degrees and in varying windows of time.

The MLB Draft remains a crapshoot and as much as every draft brings optimism and projection with it, the stark reality of looking at where a draft class that just four years ago was explained in equally flowery terms is a sobering splash of water on many of the embers of excitement generated by a particular draft.