Base Running: Which Teams Help (or Hurt) Themselves the Most?

Share All sharing options for: Base Running: Which Teams Help (or Hurt) Themselves the Most? 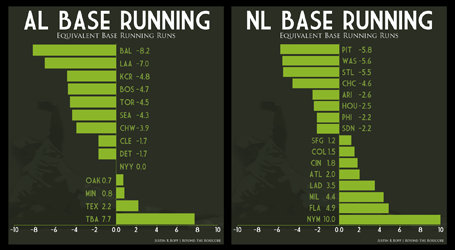 Equivalent Base Running Runs. Measures the number of runs contributed by a player's advancement on the bases, above what would be expected based on the number and quality of the baserunning opportunities with which the player is presented, park-adjusted and based on a multi-year run expectancy table.

Thoughts & Notes, Method, and Full Graphs after the Jump. 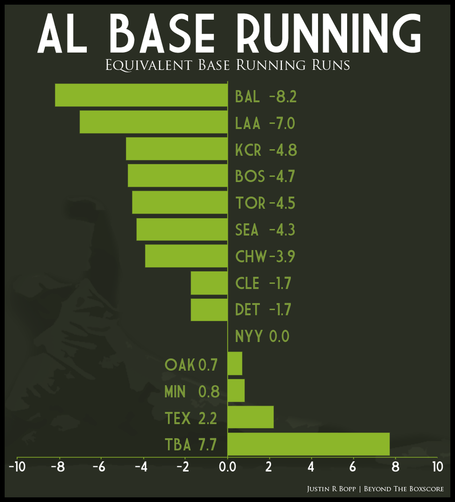 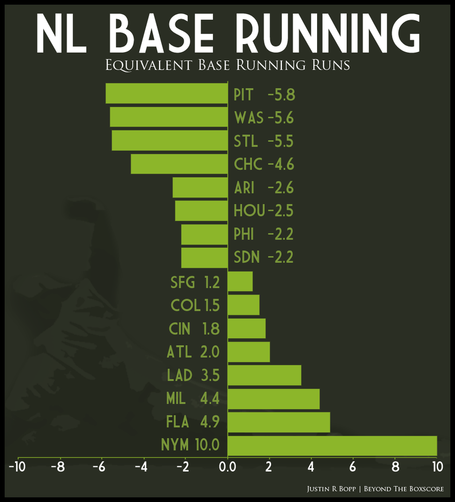 Data is based on 2010 results from Baseball Prospectus for the nine members of each team with the most plate appearances, regardless of position, and summed accordingly, pulled 06/13/10.

1. It's hard not to notice that the NL appears to have overall better runners and decision-makers on the base path. Doesn't that kinda gel with what we believe the NL should be?

3. In the course of this study, I discovered that Billy "the 23-year-old DH" Butler is currently tied for 2nd place in Kansas City with a 0.4 EQBRR. This comes as a total surprise, considering the team is supposed to be fast, athletic, and smart.

4. Now, most sabermetricians already know by heart that stealing bases is rarely worth it (you have to approach 70-75% success rate to make the risk of an out worth it), but the previous note and a couple other "oh, really?"-type big guys near the top of their respective team's list should tell you something else: "the only way to win is not to play." *

5. It's somewhat amusing to see power hitting teams like Tampa, Texas, and Milwaukee all near the best in their leagues for base running, while "speedy, grit-it-out" teams like Kansas City and Houston are in the negatives. Read: refer to previous point.