Teams Paying for Players No Longer on the Team

Share All sharing options for: Teams Paying for Players No Longer on the Team

Recently Rob Neyer (here and here) and Joe Posnanski (here) brought up how some teams are still paying the salaries of players released or traded to other teams. I went to Cot's Contracts to find which teams were being burdened by these contracts. The site also listed which teams had players on them that had some of the salaries paid by other teams for a total over 168 million dollars in 2010. Here are the 5 biggest salaries being paid by another team:

I have gone ahead and put all the players on a Google Spreadsheet for people to use.

The following graph ranks, in millions of dollars, which teams is paying the most out to players no longer on the team. If a team gets money from another team to pay a players salary, those values are considered negative. 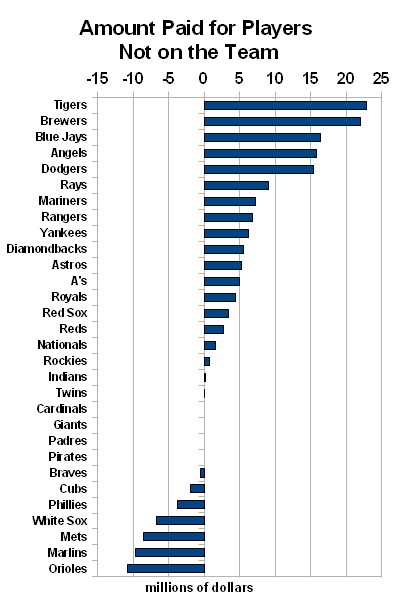 Now, large payroll teams will be able to handle an extra ten million in payroll better than low payroll teams. Here are the teams ranked from the largest percentage of payroll not going to players on the teams to the teams that are getting most of their payroll from other teams. 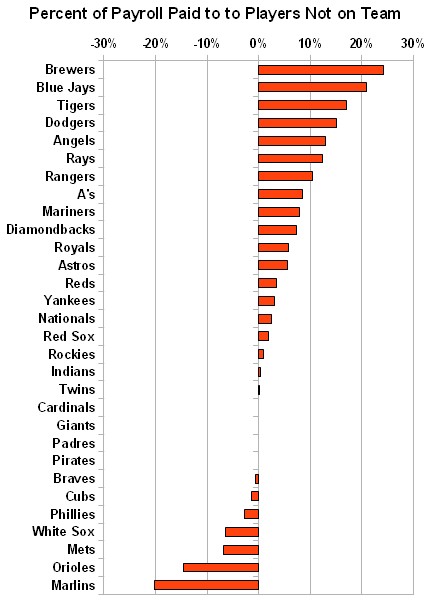 Teams like the Blue Jays, Brewers and Tigers have limited their options do to the millions of dollars being spent on players not on the team. Eleven teams wasted no money or came out ahead once the money is distributed.