The Optimism of Jayson Werth

Share All sharing options for: The Optimism of Jayson Werth

Sky's note: Please welcome Larry to BtB.  If you're not familiar with wezen-ball.com, you should be.  And that's pretty much all the introduction Lar needs.

I know I don't have to tell the BtB crowd this, but, on the off-chance someone just wondered on over here from the Joe Morgan Fan Club, I'll say it anyway: Jayson Werth is a great player.. With everything that he has done for the Phillies these last two-plus years, he is bound to make a lot of money this winter when he hits the free agent market. Whether that money comes from the Phillies - who have made it a point in recent years to sign their star players, but who might not be able to afford his services after shelling out $135 million to Ryan Howard last month - or some other team is the question.

But there's something about Werth that people tend to forget, and I have no idea how it will end up impacting his free agency: Werth just turned 31 years old last week. That puts him at the same age as Rick Ankiel, Coco Crisp, Adrian Beltre, and Kevin Youkilis, none of whom are really considered spring chickens. It also makes Werth six months older than Ryan Howard, whose age was one of the major reasons cited by those who did not agree with the contract extension.

It's easy to forget this about Werth since he didn't really hit his stride as a major leaguer until 2008. After some brief exposure to the big leagues as a member of the Toronto Blue Jays in 2002 and 2003, he was shipped to the Dodgers before the start of the 2004 season. In his three years as a member of the Dodger organization, Werth played in only a total of 191 games, hitting 23 home runs and stealing 15 bases with a league average .764 OPS. Of course, much of that time was spent on the DL or battling back from injuries. He missed the entire 2006 season after two surgeries on his wrist. Despite the missed time, Werth still earned 3.5 wins above replacement in his time in Dodger blue.

Dodgers' GM Ned Colletti non-tendered him after that wasted 2006 season (Colletti's first year at the helm). Pat Gillick and the Phillies picked him up a week later. It was his age-28 season. Given sparse playing time in the first half, he did not perform well at the plate, with only 3 home runs to go along with his .235 batting average and .686 OPS in 100 plate appearances. After yet another wrist injury at the end of June, Werth would miss the next month of the season before coming back in August and hitting the lights out of the ball. His second half stats that year are more in-line with what we've learned to expect from him: 5 home runs and 7 stolen bases to go along with 31 walks, 51 strikeouts, and a .329/.438/.512 slash-line in 204 plate appearances. The .447 BABIP didn't hurt either.

Since that time, playing in his age-29 and age-30 seasons, Werth has been the second-most valuable Phillie, behind only Chase Utley, on a team that went to back-to-back World Series. It's safe to say that he's arrived.

So why did I just spend the last 450 words reminding you that one of the best players in baseball wasn't really any good until after his 28th birthday? Because, as a Brewers fan, I'm hoping that our own tall, lanky, and speedy right-fielder has a similar late-20s emergence.

Corey Hart and Jayson Werth aren't perfect comparables, of course. Yes, their heights (6'6" vs 6'5"), builds (230 lbs. vs. 220 lb.) and shaggy beards invite superficial comparisons. And, yes, some of their skills even allow for more advanced comparisons (a proven mix of speed and power, with at least one 20-20 season from each, and good defense - well, occasional good defense in Hart's case). But Werth was always a more patient hitter than Hart and Hart's power always seemed a little more consistent than Werth's. On the whole, though, a Brewers fan hoping to see Corey Hart's ceiling in Jayson Werth isn't crazy. 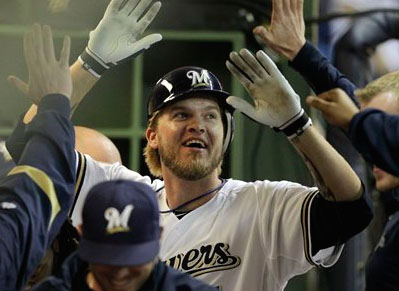 The main question is, can Hart's last 3+ years as a major league starter compare to Werth's injury-rattled years with the Dodgers? Optimistically, the answer is: yes, of course. Even when healthy, an early-to-mid-20s Werth never showed the consistency that we see from him now. It took age, maturity, and many years in professional ball for him to marshal his skillset into a package teams lust after. Hart, himself only 28 right now, is in the midst of that same process, and his early season success this year is a good indicator of it. Considering what he was able to do in his age-25 season (4.3 WAR in his first full big-league season), Hart is primed for something great this year.

It's easy to take the opposite viewpoint, though, and say that the 521 games Hart played in through the end of the 2009 season are the best possible indicators of his true talent. After all, Werth didn't reach his 500th career game until this time last year. Hart started his career well, with the 2007 season and the first-half of the 2008 season, when he finagled his way onto the All-Star team, but, since then, he's had roughly two-and-a-half good months in almost two full years. Werth's injuries are what kept him from putting up consistent numbers in his mid-twenties. Hart has no injuries to blame his decline on, and that does not bode well for his future.

I'm not a good enough talent evaluator to tell you what to expect from Hart as he reaches his thirties. As a fan of the Brewers, however, and as someone who has always had hope for Mr. Sunglasses At Night, I find it very encouraging to realize that someone as great as Jayson Werth didn't really start to pull himself together until he was older than Hart is today. And every time I see Hart lay off that slider two feet off the plate, my hope increases just a bit that he'll be the next Jayson Werth - which would be just fantastic, even if he never gets the beard quite right.