Tonight, interleague play enters its 14th year.  Here is a graphic I posted last year showing interleague records since play began in 1997.  The line is a two-year moving average.

There have been a number of arguments that try to explain what has happened here.  Below I summarize some of the main ideas I've seen put forth, as well as to provide some information about whether they have some validity:

1. Rule differences give AL teams an unfair advantage in interleague.

The argument here is that AL teams often employ a DH (e.g. Vladimir Guerrero for TEX) whose exclusive job it is to bash the ball.  NL teams don't have this, and therefore are at a disadvantage when playing under AL rules.  The counter to this argument is that if you don't have to pay a DH, you can spend more elsewhere, and thus should have better players at other positions.  Furthermore, if you want to argue this, I think you have to explain why the NL teams did just fine vs. the AL teams from 1997-2004 (see graph above).  As far as I'm concerned, this argument is a dead end.

2. The AL dominance is not a league-wide phenomenon, but rather is caused by on a few top AL teams beating the hell out of NL teams.

Here's a list of individual team interleague winning percentages over the past 5 years (2005-2009) for each team.  Leagues are color coded.

I am honestly shocked at how clean the split is between the two leagues.  This is not an instance where one or two teams are causing the entire effect.  NL teams have just been flat out inferior, and AL teams are systematically better.

Here's another look at the same thing: 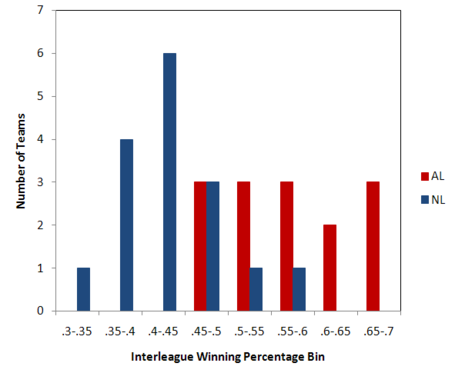 Ok, so at this point I think we have to accept that there's a talent disparity across the leagues.  This has been supported by studies examining what happens when players change to new leagues (e.g. MGL's series).  Why is the AL so much better?  Below are a few ideas.

As Jeff recently discussed, the average AL payroll at end of season in 2009 was $10 million higher than the NL ($102.5 M vs. $92.4 M) source: bizofbaseball.com's salary database).  This means that they're (probably) spending more on talent, and therefore have better teams.  The biggest component of this is the Yankees with their $220 M payroll at end of 2009, and if you eliminate the Yankees there is virtually no difference in average payroll across the leagues ($93 vs. $92 M).  I think this is a factor.  But it's not just the Yankees kicking butt in interleague (in fact, they've only been the 7th best AL team over the past 5 years), so there must be more to it that this.

Matt Swartz had a nice piece on this a few weeks ago at BPro.  He found that it was actually the non-market player spending (amateurs and free agents) that differed more between the two leagues, rather than free agent spending.  The biggest extra spenders were in the AL East and AL Central.  We often do see AL teams paying over slot bonuses (the Tigers and Yankees come to mind), and may be helping them acquire a talent advantage.  This is the first I'd seen on this, but I think it culd be a big part of the explanation.

I think the first person to really articulate this argument was Matt Klaassen.  There's some truth to it.  Think of the front offices that seem to be really heads and tails above others: Boston, Tampa Bay, Yankees, Angels, Twins...most of the ones that come to my mind are in the AL.  Then think of the really bad ones.  Sure, there are the Royals.  But there's also the Pirates (pre-Huntington, anyway), Mets, Astros, and Cubs.  Rating front offices is a very subjective exercise, and you may not agree with my examples.  But I bet if we did a community wide voting effort to rate front offices, the AL teams would, on average, come out ahead.

So what do you think?  Are there other reasons for the disparity that I haven't considered?