Pitcher Whiff Rates In & Out Of The Strike-Zone

Share All sharing options for: Pitcher Whiff Rates In & Out Of The Strike-Zone

BtB's fearless leader Sky raised a question recently about whether it was better for a pitcher to induce swings and misses out of the strike-zone, or to miss bats in the zone. My guess would be that it's better to be unhittable in the zone, since it would seem to indicate better "stuff", but sometimes these things are counter-intuitive. I decided to take in introductory look by selecting qualified starters from 2009 and breaking them down into groups by those that had better than average contact rates in and out of the zone, plus those pitchers that did both or neither.

I used the averages for the 77 pitchers as the separation points, but those marks line-up very closely with the league averages overall. O-Contact% is the contact rate against on pitches out of the strike-zone and Z-Contact% is the contact rate against on pitches in the strike-zone. Both from the indispensable FanGraphs, of course. Contact rate is the inverse of whiff rate (as I use the term), so a pitcher that prevents contact is doing a good thing (generally speaking).

A pretty good list of some of the best pitchers in baseball there. Ricky Romero's inclusion makes his 2010 success a little less surprising.

Almost all right-handed pitchers, which is interesting.

A few more lefties show up.

Certainly still some good pitchers, but not necessarily guys you'd consider to have the most dynamite stuff.

Here's a handy-dandy graph with all these guys plotted on there, with the averages as the black lines: 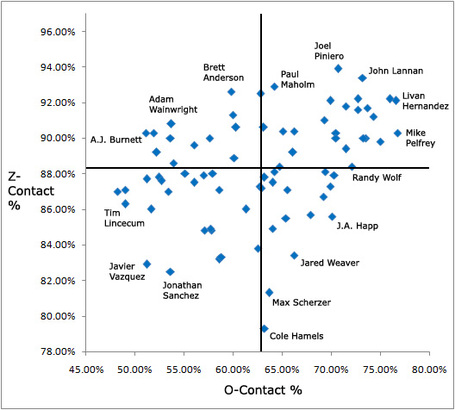 There's a slight positive correlation there, as would be expected. Pitchers that miss bats in the zone tend to miss bats out of the zone as well.

How do other stats vary between the different groups?

The pitchers that had better than average whiff rates in and out of the zone obviously had good overall whiff rates. They also struck out way more batters and had the best xFIPs despite walking more guys and only having average groundball rates.

Those that didn't miss bats anywhere had much lower strike-outs rates and posted the worst xFIPs. Even though they got some groundballs, they also gave up the most home runs. That's what happens when you allow a lot of balls in play.

It's really the two in-between groups that I'm looking at. The overall contact rates for both are almost identical, so the swings and misses that one group generates on pitches in the zone is made up for by the whiffs on balls out of the zone by the other. Their xFIPs are pretty much the same as well. The group that was better at generating whiffs in the strike-zone struck out more batters and walked fewer, but they didn't get nearly as many groundballs so they were victimized by the longball more frequently.

Perhaps the differences are explained by the pitch selection:

The pitchers that missed bats in the zone pressed that advantage by throwing more strikes, which explains the lower walk rates. They also tended to use the change-up more. The pitchers that got whiffs out of the zone threw a lot more breaking-balls - a lot. Not only did they generally eschew the change-up, but they threw fewer fastballs as well. That all mostly jives with what one would expect.

Obviously there are more factors to consider, such as the count (to pick one). Just looking at this though, if I had to choose either one or the other - getting swings and misses in the zone or out - I'd be hard-pressed to make that call. Running each of O-Contact% and Z-Contact% against xFIP though, the former correlated better than the latter (correlation coefficient of 0.66 vs. 0.41). The out-of-zone rate also correlated better with FIP (0.55 vs. 0.41) and - less significantly - with ERA (0.38 vs. 0.31).  I don't think this completely answers Sky's question, but it's a start.