And now, you can sign up for the free BtB Newsletter!

While Barry Zito isn't exactly earning every penny of that $126 million deal, this year the former ace has pitched his way back into the ranks of respectability. What is responsible for Mr. Zito's turnaround, and will he keep it up? A look at the numbers will help us answer that question.

According to his peripherals, Mr. Zito has been a bit lucky this year. Through 8 starts, hitters are only batting 0.242 against him when they put the ball in play. That's a full .030 better than his first 8 starts in 2009, and .032 better than his career line. The large difference between his 2010 FIP and his career FIP (1.08) also indicates that Zito's numbers are in store for a significant correction.

As you can see in the table below, the Giants benefit substantially from Zito's peripheral improvement: he's contributed nearly an extra win compared to this point last season, and his W-L% is reminiscent of his Cy Young campaign. (Seasonal totals from the first eight starts of each season. Source: FanGraphs).

Of course, we shouldn't be satisfied in chalking up Zito's performance to luck. First, that doesn't really tell us anything. Second, we don't know if that's true just yet. So let's dig a litter deeper, shall we? With the help of PitchFX data from Brooks Baseball, we can see if Zito's pitches are behaving any differently this year than last. Typically, I start off by looking at overall velocity across all pitches. In this particular case, however, it's clear that pitch speed isn't explaining Zito's 2010 boost. See the chart below: 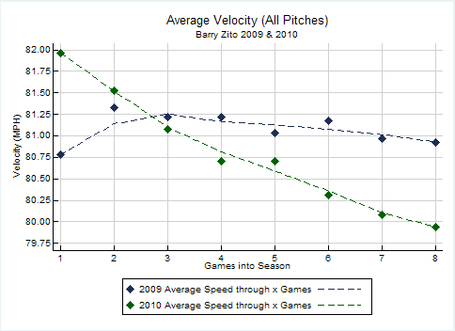 The chart represents the season-to-date average velocity of Zito's pitches through equal numbers of starts in 2009 and 2010. As is clear, Zito's pitch velocity started out strong but is currently trending in the wrong direction. For some time now, Zito's pitches have been slower than during his eight disastrous starts in 2009. Certainly, this can't positively explain Zito's 2010 performance. What about break? 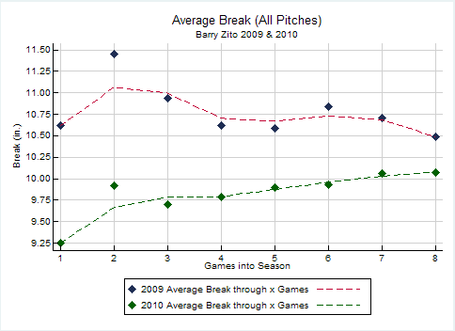 The chart above does the same thing with average break as the previous chart does with average speed. And while Zito is adding break to his pitches as the season progresses, his pitches' average break is still short of what it was last year. The funny thing is, even though Zito's velocity and break are down, hitters seem to be having just as much trouble with his pitches. Zito's strike rate is essentially what it was this time a year ago.

In summary, Zito's pitches are slower and don't break as much as they did in 2009. Despite this, Zito's strike rate is almost identical to last year's. And even though his pitches are slower, don't break as much, and are just as effective at the plate in 2010 as in 2009, his results are far better. Clearly, this data isn't getting at what we need, so let's unpack it even further.

Well now we're getting somewhere. When we disaggregate Zito's fastballs and curveballs from the rest of his pitches, we see a substantial difference between this season and last. Zito is relying a lot more on his two-seamer this year, seemingly at the expense of his four-seam fastball. Either that, or Zito changed the spin of his four-seamer so that PitchFX picks it up as a two-seamer; the important thing is that he modified the spin on his fastball. Moreover, he's utilizing his curveball more often. Overall, Zito's pitch selection is far more balanced this season; see below: 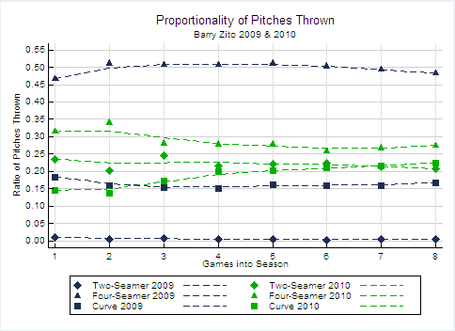 While we can't be sure that pitch selection is responsible for Zito's favorable results--again, the strike rate hasn't changed much and speed and break are still down--I surmise this might have something to do with Zito's low BABIP and other waxing indicators. The added break on his two-seamer and curve may be inducing more batters to softly ground out--indeed, his GB/FB and GB% are all sitting at multi-year highs, while his LD% and FB% are at multi-year lows. This is both remarkable and probably unsustainable. Finally, the more balanced pitch selection means that hitters can't as easily anticipate Barry's four-seamer.

And no, Barry Zito is not going to keep up this pace. New pitches are useful, but they probably can't buy you thirty BABIP points. Hopefully, for Giants fans, Zito leveling off will look a lot more like his last start than his second-to-last. That said, if the break on his pitches continues to improve, and if the former Cy Young winner can keep his velocity up, then Barry Zito might be able to keep up with Tim Lincecum, Matt Cain and Jonathan Sanchez in the Bay Area Batters Frustration Club.