Graph of the Day: Runs Above Average Breakdown for Philly's Offensive Core

Share All sharing options for: Graph of the Day: Runs Above Average Breakdown for Philly's Offensive Core

Following up on our recent discussion of the most underrated players in baseball, a few of us BtB'ers thought a value breakdown graph of some top Phillies hitters might be in order. After all, it was Chase Utley who topped the "underrated" list (tied with Shin-Soo Choo). We stat geeks often like to put him on a pedestal above one of his more overrated teammates. This graph provides me an opportunity do that without saying a word—just providing numbers. Or a picture. Or... you know what I mean. 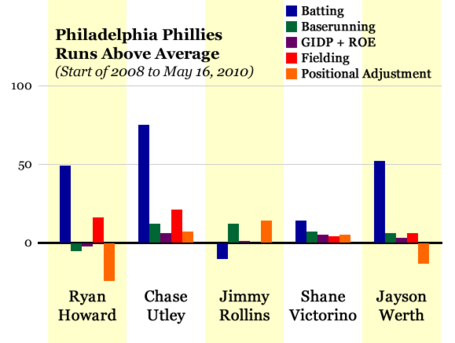 (All data from Rally's WAR database — which is now on Baseball-Reference!)

Update: I did miss something! Per Sky's comment, total runs are:

There may be some slight inconsistencies with the graph above since B-R has an extra day of data now.